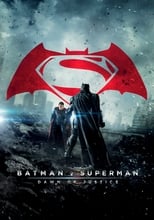 Release: Mar. 23rd, 2016
Runtime: 2 hours, 31 minutes
Fearing the actions of a god-like Super Hero left unchecked, Gotham City’s own formidable, forceful vigilante takes on Metropolis’s most revered, modern-day savior, while the world wrestles with what sort of hero it really needs. And with Batman and Superman at war with one another, a new threat quickly arises, putting mankind in greater danger than it’s ever known before.

We didn't find any linked discussions for this film. Here are the results of a quick search of possibly related threads:
17 Batman vs Superman: Dawn of Justice
Batman vs Superman: Dawn of Justice(2016) This film has been very divisive from the moment Ben Affleck had been cast to replace Christian Bale as the Dark Knight. The film is a direct sequel to Man ...
2148 Batman vs. Superman: Dawn of Justice
Although the plot is being kept under wraps, here's more info.... In addition to the two heroes, there are three great parts for women. Superman's Metropolis and Batman's Gotham City will be f...
12 Why Green Lantern in not in Batman v Superman: Dawn of Justice (2016)
Justice League: 1- Superman --- Henry Cavill 2- Batman --- Ben Affleck 3- Wonder Woman --- Gal Gadot 4- The Flash --- Ezra Miller 5- Green Lantern 6- Aquaman --- Jason Momoa 7- Cyborg --...
26 Will Superman appear in Justice League???
Because according to me Justice league is incomplete without Superman and I have heard rumors that he won't appear in the movie... What are your thoughts about that?...
0 Superman is In...... For Justice League 2017
I recently scrambled a video of Justice league recent trailer on youtube which in last shows Presence of Superman in Justice League. Have a Look and Do Share Your Thoughts. ...

seanc I took notice of it several times throughout the film and I would definitely say it is my favorite among comic book films.
READ REVIEW

Iroquois In working to re-establish a much more jaded version of Batman whose qualms about killing criminals have fallen by the wayside (thus presenting a genuine danger to Superman if the situation arises), Batman v Superman not only threatens to ruin what made these characters so beloved in the first place....
READ REVIEW

Optimus When discussing the film, Henry Cavill said that it would address a major issue that fans and critics had with Man of Steel (2013), involving the huge amount of collateral damage caused in the film's climax during Superman's battle with General Zod in Metropolis.
READ REVIEW
View All (10)