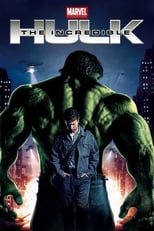 Release: Jun. 12th, 2008
Runtime: 1 hour, 54 minutes
Scientist Bruce Banner scours the planet for an antidote to the unbridled force of rage within him: the Hulk. But when the military masterminds who dream of exploiting his powers force him back to civilization, he finds himself coming face to face with a new, deadly foe.

TheDOMINATOR In conclusion, aside from those two minor issues, this movie was excellent and action-packed with some of the best battle scenes of any superhero movie to date, and is on a level with my other all-time favorite superhero movies including Iron Man and even Spider-Man..
READ REVIEW

Optimus Edward Norton was cast as Bruce Banner on the recommendation of Lou Ferrigno, who had starred in The Incredible Hulk (1978) as the Hulk.
READ REVIEW

TheUsualSuspect While the new version is better then what Lee gave us a few years back, it still isn't an eye popper..
READ REVIEW
View All (9)