The Oscars are early this year! Don't forget to make your picks.
← Back to Movies 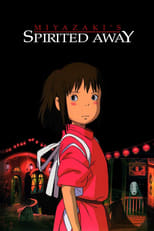 Release: Jul. 20th, 2001
Runtime: 2 hours, 5 minutes
Spirited Away is an Oscar winning Japanese animated film about a ten year old girl who wanders away from her parents along a path that leads to a world ruled by strange and unusual monster-like animals. Her parents have been changed into pigs along with others inside a bathhouse full of these creatures. Will she ever see the world how it once was?

2 Spirited Away: best animated film ever?
Also trying it out, but I additionally want to say something. I think this is the best animated movie ever made and certainly Miyazaki's finest work? I find I can always return to, and it's certainly ...

Gatsby This film is just one of his silly, but mythical and awe-inspiring films that he's done for years.
READ REVIEW

Cobpyth I immediately considered it as my new favorite animated movie and while the film has been challenged by a few other great films since, it still holds that place today.
READ REVIEW

Citizen Rules Just like a well made live action film, Spirited Away has amazing cinematography, lighting and sets.
READ REVIEW
View All (10)