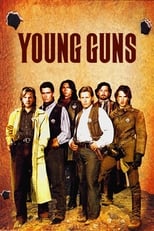 Release: Aug. 12th, 1988
Runtime: 1 hour, 47 minutes
A group of young gunmen, led by Billy the Kid, become deputies to avenge the murder of the rancher who became their benefactor. But when Billy takes their authority too far, they become the hunted.

We didn't find any linked discussions for this film. Here are the results of a quick search of possibly related threads:
47 Young Guns
Okay, Rodent - talk about it....
6 Young Guns 1 vs Young Guns 2?
Which movie was better? For me Young Guns II is one of the greatest Western Movies of all time. Been doing a little bit of reading on this Brushy Bill Roberts fellow and I'm 80% sure he was not Bil...
17 Billy the Kid by drone, real locations from Young Guns movies
I sure hope rat still posts here, old threads shows him a Lincoln county war aficionado. That took tons of work to source, cite and produce. The best pre reading material before watching that is ...

The Rodent It also turns out McCarty is known around the County, and so are most of Tunstalls other men, and with Tunstall hiring these disparate characters, most of them good with a gun, tensions run high between the two factions of Tunstall and The Hous.
READ REVIEW