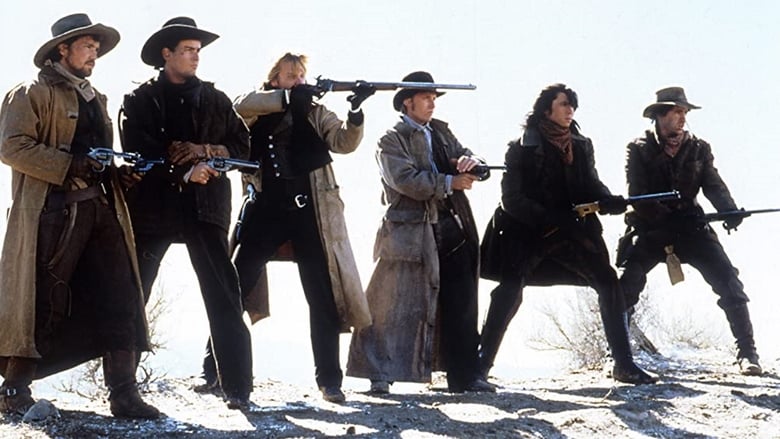 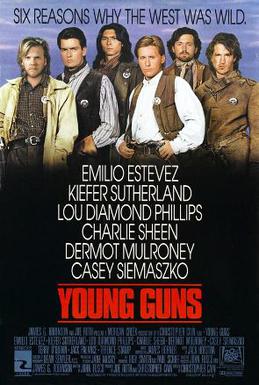 
Notes
Tom Cruise was on set during the end fight, he was visiting his friends Estevez and Sheen, and he even has an uncredited role in the film… watch out at the end for the moustachioed Cowboy who sprays blood on the camera when he gets shot.


Estevez was also extremely depressed during filming as he had been through a bad breakup with his Girlfriend… so Lou Diamond Phillips got an inflatable sheep, put it in some women’s clothing and left it in his hotel room for him.


Two actors were also shot during production. Estevez was hit in the face and Mulroney in the shoulder. Apparently the blank firing guns had wadding and ceramics packed into them, causing some projectiles to fire from the ”safe” weapons.


The scene when Estevez and Sutherland are writing a letter wasn’t scripted exactly… the Director withheld the “speech” from the actors and had Estevez read from a cue-card to make it seem like he was making the speech up off the top of his head.


Synopsis:
Based loosely on the Lincoln County War of 1878 and the beginnings of the Billy The Kid Legend.

Englishman John Tunstall’s aim in life is fair game and fair play in business (cattle ranching) and making a profit, and it has brought him into conflict with The House, a gang made up of wealthy Irish Ranchers and Politicians plus their several groups of gunslingers and cowboys, who believe Tunstall has stepped onto their turf.


When Henry McCarty, a young yet streetwise kid appears on the streets of Lincoln and ends up in a sort of protective custody of the wealthy Tunstall, Henry (more commonly known as William H Bonney) finds himself in a homely “school” environment where he and Tunstall’s other men work as Cowboys to pay for an education.


It also turns out McCarty is known around the County, and so are most of Tunstall’s other men, and with Tunstall hiring these disparate characters, most of them good with a gun, tensions run high between the two factions of Tunstall and The House…


… and The House, driven by greed, anger and jealousy, make a move against John Tunstall, and bring War to Lincoln County...

Review:
I say “loosely” based on The Lincoln County War in the synopsis… Young Guns is the most accurate telling of the legend than any other film outside of a documentary.
The filmmakers, wisely maybe, have taken key elements of the War, and watered them down for an audience to fit into an hour and twenty running time.
The film never loses the viewer, or bombards you with too many talky scenes or scenes with no payoff.


The movie plays out like a typical action western and never fails to disappoint from scene to scene simply through the style of writing and dialogue that’s laced throughout.
The feel and look of the movie adds great depth that’s missing from most other Billy The Kid movies… being based more toward reality rather than on Dime Novels and make-believe stories of that bygone era makes Young Guns stand out through sheer realism and historical fact.
The entire movie has a feel of being shot with a sepia filter on the camera lens too, not a bad thing though, it adds to the authenticity of the Wild West setting.
There’s also some situational humour throughout too, so it’s not all about gunfights and high speed horse chases.


There’s even a few hints at genuine research on the filmmakers behalf, for instance when Billy quips “I ain’t left handed” while reading a newspaper article.
There is one scene though that stands out… the killing of one of The Regulators alongside two of The House’s men called William Morton and Frank Baker and it shows that our “Good Guys” weren’t exactly innocent of murder throughout the War.
Thumbs up for that, it’s a relatively historically accurate portrayal of what kind of men our apparent Heroes could be when it suited them.


The bad point of the film though… it may be the most accurate telling of the War, it has still been watered down for an audience.
The Lincoln War itself has more to it, which could have made for a longer, maybe more interesting movie historically.
The War itself took place over a 6 month period and had a couple hundred men involved. The Regulators themselves numbered near 70 men… but in the film we only see a maximum of 7… most of them too are crossed and merged with real life people who were omitted from the cast sheet.
The role of Billy The Kid is also inaccurate. Billy was never a leader, nor even a key player for that matter, so some of the Dime Novel influence of the 1800s still affects the story to an extent. Even so, Billy’s character, is spot on.


The Filmmakers decided the use of 'Brat Pack' actors would be good for a serious movie and they hit on a very special casting.
Emilio Estevez as Kid is an inspired piece of casting, Estevez carries The Kid’s persona extremely well. Young and cheeky yet streetwise and naďve at the same time. Most of the humour comes from Estevez too, which in reality was true.
Charlie Sheen makes possibly his best appearance on film too as Richard Brewer, the original leader of The Regulators (which is almost true). Sheen also comes to loggerheads with Estevez a number of times and it’s actually pretty cool to watch two real-life Brothers fight onscreen.
Kiefer Sutherland is also perfectly cast as Josiah G “Doc” Scurlock. He’s a little too handsome though, but his character traits are bang on the money. I loved Sutherland in this role.
Casey Siemaszko and Dermot Mulroney make a kind of humorous double-act as Charlie Bowdre and Dirty Steve Stevens… Mulroney’s character was a kind of addition as the real Steve didn’t have a lot to do with the War. They make a great double act though and their chemistry with each other is great to watch. Their roles have been merged with the real-life relationship between Bonney and a lad called O’Folliard, who were best friends.
Lou Diamond Phillips plays another rewritten role in Chavez Y Chavez… he’s totally different to the real life man but Phillips carries the huge weight of being more a supporting character that then has a pivotal role on more than one occasion.
Supporting actors include:
Jack Palance as LG Murphy. Believe it or not, Murphy had little to do with the actual War. He was dying of cancer during the War and it was two other guys who we don’t really see who were behind the original murder. Palance though, man this guy is menacing when he wants to be… he’s also a perfect villain. Hey, it’s Jack Palance, what more can I say?
Terence Stamp as John Tunstall is (as always with Stamp) a very inviting character, mature, wise and mildly amusing. A little old, Tunstall in real life was only 24 years old, but Stamp makes the perfect surrogate father figure for the wayward Cowboys he’s hired.
Patrick Wayne, son of John Wayne, makes a cameo as Pat Garrett too and Terry O’Quinn also makes a couple shows as Tunstall’s Lawyer Alex McSween.
All in all though the handsome cast of 'good guys' teamed against Palance's group of grizzly, hairy ‘bad guys’ makes you route for the Regulators even more.


The action and choreography though is superbly portrayed throughout. Horse chases, gunfights, the occasional murder… all held within a real backdrop and backstory.
One thing that will throw the audience is that what appears to be an OTT gunfight ending, actually happened in real life.
In real life though, the fight was much larger than what is shown in the film… which is where the movie suffers again sadly with watering down some of the facts.
If they had made just a slightly larger scope for the movie then that ending would have been possibly the best climactic scene to any Western in the history of film.
We’d have been talking 200 House members and a pile of mounted soldiers, all facing off against around 40 Regulators...

All in all, more accurate than any other Lincoln/Kid film, and I mean ever, it’s still inaccurate in many respects.
Young Guns though is a ripping adventure across the Wild West and has that accuracy to back it up and gives all the thrills, laughs and gunplay a Western Fan would want and stands the test of time after 26 years.
My rating: 90%