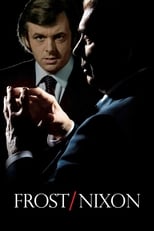 Release: Oct. 15th, 2008
Runtime: 2 hours, 2 minutes
For three years after being forced from office, Nixon remained silent. But in summer 1977, the steely, cunning former commander-in-chief agreed to sit for one all-inclusive interview to confront the questions of his time in office and the Watergate scandal that ended his presidency. Nixon surprised everyone in selecting Frost as his televised confessor, intending to easily outfox the breezy British showman and secure a place in the hearts and...

14 Frost/Nixon
CAST: Rebecca Hall Kevin Bacon Sam Rockwell Michael Sheen Patty McCormack Frank Langella Oliver Platt Max Elliott Slade Holly Weber Jenn Gotzon PLOT: A dramatic retelling of the post-Watergate telev...
3 Frost/Nixon Review
I've done a search and couldn't find a thread on Frost/Nixon. Has no one else been to see it? If not you're missing out on some excellent performances. A few friends have been put off by the thought...
4 Nixon
Could I have some views on this movie I haven't seen it for quite some time. I'm intrested in what you Guys & Gals think about it thanks...
3 Movie about Richard Nixon
Hi! My name is Matthew and I'm new to the forum. I came here because I once saw this movie trailer about the cold war or the Nixon Watergate scandal and I just can't remember the name of the film nor ...
27 Frost: A New Killer
I Heard About The New Killer this would be the one of the top killer movie's the top 4 is Jason Voorhees Freddy C. Mike Myers !NEW! FROST frost is goin to be like jason he is immortal...

Powdered Water I've done a little reading as I often do after a film like this one moves me and I also watched the actual interview that Frost held with the former President.
READ REVIEW

Sinny McGuffins It's interesting what Jack Brennan, played by Kevin Bacon, had to say in a documentary-style interview (which appear throughout the film) when he talks about Nixon's calm and rational response to Frost's bold first question, "Why didn't you burn the tapes?".
READ REVIEW

Gideon58 We watch as Nixon's agreement to do this interview not to be the magnanimous gesture he initially tries to portray...the man only agrees to do it for an obscene amount of money that Frost doesn't have but goes through tireless fundraising and we watch Nixon's struggle right down to the climactic mom....
READ REVIEW
View All (4)