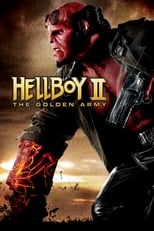 Release: Jul. 11th, 2008
Runtime: 2 hours
An evil elf breaks an ancient pact between humans and creatures, and is on a mission to release 'The Golden Army', a deadly group of fighting machines that can destroy the human race. As Hell on Earth is ready to erupt, Hellboy and his crew set out to defeat prince and his army.

We didn't find any linked discussions for this film. Here are the results of a quick search of possibly related threads:
33 Hellboy II: The Golden Army
I sense no depth in this upcoming sequel of the 2004 Best Make-Up Saturn Award. What say you Mofo members? The mythical world starts a rebellion against humanity in order to rule...
30 Hellboy II: The Golden Army
Here's my review of Hellboy II: The Golden Army. Saw it over the weekend, but computer problems and other distractions held me up and I just got around to writing a review today. Was pretty underwhelm...
2 Hellboy Director's Cut DVD + Hellboy Gift Set
Title: Hellboy Starring: Ron Perlman Released: 19th October 2004 SRP: $34.95 Further Details Columbia has announced Hellboy: The Director's Cut which is the latest film from director Guillermo...
16 Army of the Dead - Army of the Disappointed
Army of the Dead Here is a life lesson for anyone reading this. If it says this a Zack Snyder original movie, then it's not gonna be very good. If he has some sort of source material, then he usual...
8 Hellboy III
Director Guillermo del Toro has hinted that there will be a third and final Hellboy movie. Guillermo’s plan for a third film would involve the B.P.R.D. facing off against modern twenty-first century...

TheUsualSuspect ...this film improves on some things from the original, but not so much to make me really adore it..
READ REVIEW

Lennon To sum it up, Hellboy II is a pinnacle of comic book film making funny and action filled..
READ REVIEW

mark f Ron Perlman is still the perfect Hellboy, even if I thought he had more to do and did it better in the original, but what about the insane new character, Johann Krauss.
READ REVIEW
View All (5)