by Gideon58
posted on 8/03/13
in
1776 is the 1972 film version of the groundbreaking Broadway musical that chronicles the people and events that led to the writing and signing of the Declaration of Independence.

The musical centers on soon to be second President, John Adams, who according to this musical was a tireless but obnoxious advocate for the thirteen colonies independence from Great Britain and it was his zeal for this cause that led him to being central to the creation of the Declaration of Independence.

William Daniels brilliantly recreates his Tony-nominated Broadway role as John Adams, the restless and ever-vocal spokesperson for Independence who would not be silenced. He receives solid support from Howard da Silva, who does a scene stealing turn as Benjamin Franklin, Ken Howard as Thomas Jefferson, John Cullum as Edmund Rutledge, and the lovely Blythe Danner as Martha Jefferson. Virginia Vestoff also recreates her Broadway role as Abigail Adams, John's wife who is presented as communicating with John through letters brought to life. 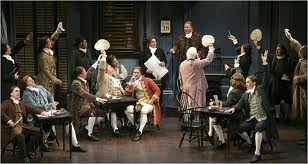 The heart-pumping musical score features highlights such as "Sit Down, John", "He Plays the Violin", "Yours, Yours, Yours", "But Mr. Adams", "The Egg", "The Lees of Old Virginia", and the haunting "Molasses to Rum" (brilliantly performed by Cullum). One number, "Cool Considerate Men" was cut during the film's original release but has been restored to some prints. If you're a musical comedy fan with an open mind willing to experience something a little different, give this treasure a try.
» More about 1776
» More reviews of 1776
» More reviews by Gideon58