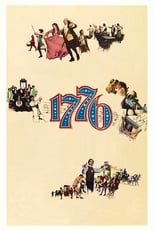 Release: Nov. 9th, 1972
Runtime: 2 hours, 22 minutes
The film focuses on the representatives of the Thirteen original colonies who participated in the Second Continental Congress. 1776 depicts the three months of deliberation (and, oftentimes, acrimonious debate) that led up to the signing of one of the most important documents in the History of the United States, the Declaration of Independence.

We didn't find any linked discussions for this film. Here are the results of a quick search of possibly related threads:
6 Regarding the muscial 1776...
I know the musical fans on these boards are few and far in between, but this question has been nagging at me all weekend and I thought I would bring it here. In the movie, there are several scenes wh...

Citizen Rules And check this out...the silhouetted figure against a black background during Momma Look Sharp is very much like the opening video for Bohemian Rhapsody....OK, one last thing, at the end of Is Anybody There.
READ REVIEW

Gideon58 The musical centers on soon to be second President, John Adams, who according to this musical was a tireless but obnoxious advocate for the thirteen colonies independence from Great Britain and it was his zeal for this cause that led him to being central to the creation of the Declaration of Indepen....
READ REVIEW