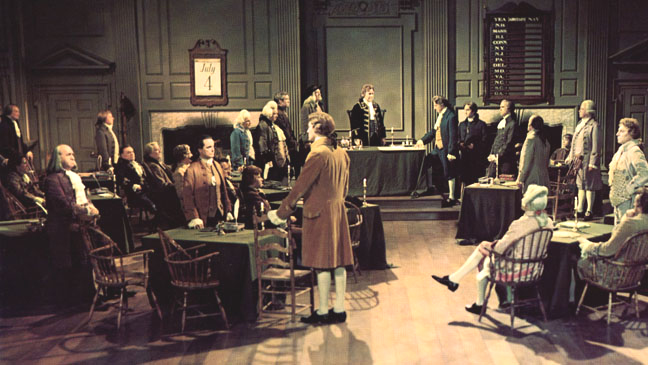 
The Continental Congress covens in 1776 during America's Revolution to decide the fight of the new nation.

One of the most different and interesting musicals ever made. The story of the Declaration of Independence, set to music. It was intriguing to watch these diverse group of men from the original thirteen colonies, who've formed a congress to decide the fate of the future United States of America. I always liked history, and I have to say I got a good history lesson from this.

Somehow the dramatization of the first Congress and the difficulties it faced in trying to get all the delegates to unanimously agree to declare independence, was a powerful teaching tool. I felt like I was there in the room and privy to history in the making. 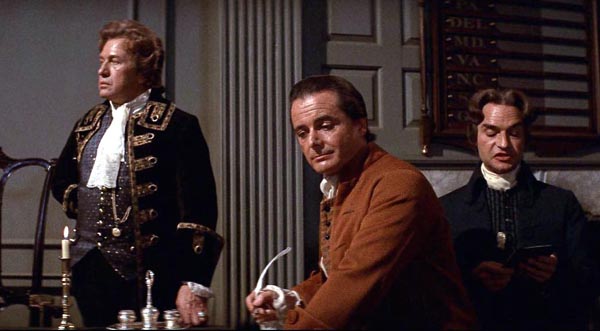 I found the fight over the passage about slavery particular interesting, and the compromise that was ultimately made saddening... but not surprising as people thought-out the centuries have put their pocket books over morality.

Perhaps the strangest moment was a personal epiphany when I heard the song Momma Look Sharp...a song that sent shivers down my spine and gave me more emotional impact in a few minutes, than most movies can do in hours. Sung in the first person, by a dying soldier to his mother. Both the theme, the arrangement and the vocals really reminded me of the third part of Queen's Bohemian Rhapsody. I'm convinced that Freddie Mercury seen 1776 and was inspired by Momma Look Sharp.

And check this out...the silhouetted figure against a black background during Momma Look Sharp is very much like the opening video for Bohemian Rhapsody....OK, one last thing, at the end of Is Anybody There? There's a refrain song by John Adams that's also very reminiscent of the ending refrain of Bohemian Rhapsody.

The end part of: Is Anybody There, video

Oh, I almost forgot to mention how impressed I was with the streets of Philadelphia and the inside of Congressional Hall. We get so use to movie magic that it's easy to forget in these older movies that to make the locations look authentic 18th century they had to go to great effort. 1776 looks authentic!

There's lots of music, and lots of clever wit and charm in 1776.