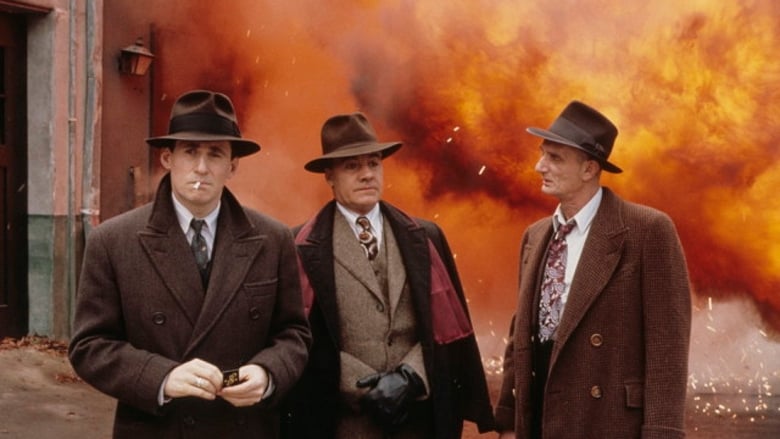 by JayDee
posted on 7/22/13
in
As a result of public demand (well one person enquired!


Written by
Joel and Ethan Coen


Plot - In an unnamed town in the Prohibition era 1930s, a gang war threatens to tear the city apart. Tom Reagan (Byrne) is an advisor to the big crime boss of the city, Leo O'Bannon (Finney). When Leo refuses a request from one of his rivals, Johnny Caspar (Polito), the disagreement soon escalates into an all-out feud between the respective clans with Tom, who was pushing for Leo to acquiesce to the demand, caught in the middle. Attempting to maintain a peace between the families, Tom instead finds himself thrown out of Leo's mob when it's discovered he has been fooling around with Leo's girl. With nowhere else to go he joins up with Caspar but not is all as it seems. Tom continues to plot and manoeuvre individuals all over the place like a chess master. He seems to have everything worked out, but will he live long enough to benefit from his planning?

As has frequently been the case throughout their career, the Coen brothers take on a genre that has definitive tropes and boundaries and put their very distinctive stamp on it. This time out they take the gangster flick and place it firmly in the territory of neo-noir, while at the same time weaving a light and occasionally cartoonish thread through it, complete with a little dash of their usual quirk.

To start with the film is just glorious to look at, its direction and cinematography making just about every scene a treat to look at. It's wonderfully directed and the compositions that the Coens create are captured beautifully by the lens of Barry Sonnenfeld. While the whole film is tremendous to look at, there are a couple of particular scenes I'd like to highlight. In the scene where Tom has been taken out to Miller's Crossing with the intention of bumping off Bernie, I love the image of the men standing against the car with the road and the trees seemingly stretching off in to infinity. While Tom's white knuckle walk through that forest in the search of Bernie's body is a tremendously nerve-shredding piece of cinema. However I think my absolute favourite scene would have to be the attempted assassination of Albert Finney's Leo in his home. It's a great scene of ironic juxtaposition as we find Leo relaxing in his bed, smoking a cigar and listening to the evocative strains of 'Danny Boy', when two faceless gangsters enter his home with the intent of wiping him out. Cutting back and forth between Leo lying on his bed and his would-be killers its a beautifully executed little piece of storytelling told merely through its visuals. It seems deceptively simple but its a delightfully deft working of direction and editing to convey the events as Leo begins to suspect something is up. The killers remain faceless; all we glimpse are shots of their shoes and the barrels of their guns, as Leo spots smoke wafting up between the floorboards and realised something is up. Looking at Finney's face you can just see the cogs in his mind working. The scene then unleashes itself into an unflinching assault of violence while the poignant 'Danny Boy' continues to underscore the action. The film then descends into something almost cartoonish as Leo releases an apparently never-ending amount of bullets into the hitmen. Indeed at one point I think one of the men may have been doing the distress signal from Team America!

The Coens deliver a fantastic script, crafting a dense intricate plot and layering on hard-boiled dialogue that just sings. It's a thrilling and intelligent story, brimming with twists, turns, double crosses, triple crosses and even the odd quadruple cross! It really does keep you on your toes as you attempt to follow the constantly switching allegiances, made all the more difficult by Byrne's icy, detached nature which meant I was never entirely sure of his intentions. And as you would have a right to expect from a Coen brothers film, the dialogue is superb. It bounces around between the funny and quirky, the harsh and hard-boiled, the creative and rapid-fire. The dialogue has an almost lyrical quality to it which lulls you into a bit of a trance-like state, making the occasional bursts of violence (the shovel to Dane's face) all the more jolting. While it's so well crafted that even words that were completely alien to me I was immediately able to assign the correct meaning to.


Film Trivia Snippets - As a result of trying to tackle the film's intricate plot, the Coens suffered writer's block while working on the script. They took a break from Miller's Crossing, during which they knocked out the script for Barton Fink (about a writer with writer's block) in just three weeks before return to Miller's. The brothers subsequently introduced a few references to Barton Fink. Tom's residence is called 'The Barton Arms' while a newspaper article talks of 'seven dying in a hotel fire.' /// The character of Leo was actually written for Trey Wilson. Wilson, who portrayed Nathan Arizona Sr. in Raising Arizona, died shortly before production began however, and Albert Finney was drafted in to take over. /// Originally Jon Polito was offered the role of Eddie Dane, but he successfully campaigned to take on the role of Caspar.
The film is impeccably acted by its ensemble. As I alluded to earlier Byrne is one stony-faced, hard-boiled motherf*cker! With ice in his veins and a quip constantly on the tip of his tongue he is quite an enigmatic, brooding character and an absolute definition of an anti-hero. I admire the Coen brothers for treating the audience with enough respect that they don't try and make him relatable, or soften his character to try and make him seem more sympathetic or likeable. There's a great contrast between the two mob bosses that Tom finds himself caught between. Albert Finney is magnetic as the stoic Leo, a man of great resolve; while Jon Polito's performance is a mile away. He's wild, chaotic and damn eccentric. He gives a sense that he's not particularly in control of his emotions and that doesn't really know what he's going to do next. That makes him quite a scary prospect. It's impossible to predict what he's going to do if he himself doesn't seem sure. He's fantastic. As Bernie Bernbaum, the catalyst for the whole fiasco, John Turturro is quite electrifying as a manic character who really is all over the map. He does do a bit of fine scenery chewing, particularly in the scene where he is begging for his life in the woods. At the time I felt it was a bit too over-the-top but when you find out later that it actually was all an act, it works in the context. And as a result when he tries to squirm out a second time it is nowhere near as convincing. Initially he seems a bit of a bumbling fool, and it was a bit of a shock when he turns things around and reveals himself to be quite the vile little sociopath.

Miller's Crossing also features a really quite gorgeous score courtesy of Carter Burwell; composed of haunting, profound and stirring notes. In particular the music that both plays over the opening titles and that closes out the film is just phenomenal; a truly emotional, heart-stirring piece. It perfectly equates to the film. I was able to close my eyes and just listen to the music, and in my mind it created the same sort of autumnal aesthetic of browns and greens that the film itself has. The music stuck with me long after the credits had finished rolling, and to play into one of film's quotes, Carter Burwell 'put one in my brain' so to speak. High marks too for those responsible for creating the film's period detail, which not only sets out the world in a stylish manner but actually manages to flesh out and give depth to its characters.

If I were to level any criticisms at the film it's that I perhaps found the majority of its pleasures to be largely of a technical nature. As a result of it perhaps being a bit of an exercise in style over substance, that it's occasionally a little too self-aware and clever for its own good, and that it's tough to take any of the characters to heart, I struggled to really form a strong emotional attachment with it. But that could just be on the first viewing. I watched it over two separate stretches and in the first it wasn't doing anything for me at all really, but when I picked it back up I found myself becoming more and more invested in it. Perhaps returning to it I would feel the same for the whole film. I could definitely see my score rising in the future.

Conclusion - Back in 1990 the Coen brothers crafted a compelling, lyrically shot film with Miller's Crossing. On a technical level it really is hard for me to find a single fault; the acting, directing, writing, cinematography, score...just everything is top notch. In my personal ranking of the Coen brothers flicks this would probably land around the no. 4 spot at the moment I think. In terms of just the overall quality of their films though, this might be right up there at the top.
» More about Miller's Crossing
» More reviews of Miller's Crossing
» More reviews by JayDee