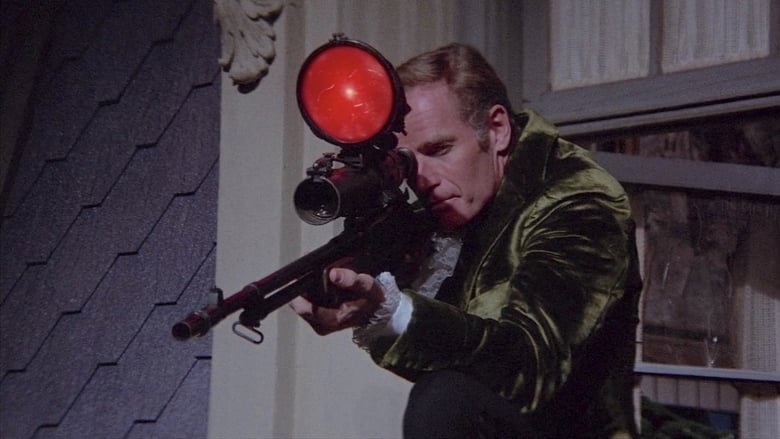 Plot – A biological conflict between Russia and China has left the world in ruins as a plague has wiped out most of the human race. Doctor Robert Neville (Charlton Heston) is the last unaffected man alive, or at least he believes so. While trying to work on a cure, he also must fight off a group of mutated humans known as 'The Family', led by the enigmatic Matthias (Anthony Zerbe).

Talk about your drop-offs in quality. Now I know I'm a generous reviewer and rater but for the most part I think I've been watching some high-quality films in my little 70s thriller season. As a result this sticks out like a sore thumb. Even the films I haven't fallen madly in love with have at least had some impressive qualities that I've admired and been interested by. This however in terms of acting, scripting, directing and production design is just dreadful. This is some cheap, cheesy, ham-fisted stuff.

Using Richard Matheson's I Am Legend as its inspiration (though quite loosely from what I understand) the film has a great premise to base a film on; that being the story of the last man alive. After that however it depends on where you go with it.

The film actually starts fairly decently (almost masterpiece like quality compared to what it descends in to) as Heston drives through a deserted Los Angeles, and does battle with the ghouls that stalk and haunt him. It creates an entertaining and somewhat eerie tone to kick off the film. But then people start talking and things start to quickly fall apart!

In fact that's kind of the story of the whole film, it's at its best when everyone is just keeping their mouths shut.

One of the film's main (and many) failings are the albino zombies/ghouls/vampires/whatever the hell they are meant to be. They are just too ridiculous and downright cheesy to take them seriously. With their pale faces (seemingly dusted with talcum powder) and black robes they are just laughable; reminding me of some of the really cheap, dodgy creations you would get on the 60s Batman show or old episodes of Doctor Who. And the grandiose way in which they talk about their new world order drivel doesn't help matters. And for the main threat in a film they are also pretty damn hopeless. They are incompetent, disorganised and constantly outwitted and outfought by one solitary man.

There are some truly dreadful moments of acting here, not helped by some of the cringeworthy dialogue they are made to spout. I think worst of all is the moment a young girl looks up at Neville and ever so earnestly asks “are you God?” And it's not just the young or inexperienced actors that are at it. Good old Oscar-winning Charlton Heston himself chips in with just about the worst attempt at a laugh I've ever heard. Heston's performance and the scrip both also ensure that Neville does not come across as particularly vulnerable. Unlike Will Smith in I Am Legend I didn't really get that much of a sense that he was struggling in this world all by himself. There are a few attempts to make him appear lonely and isolated but they don't really succeed. As a result I didn't greatly care for him or what might fate might befall him.

The film is like a car crash. No matter how bad it is it's difficult to tear your eyes away. As a result I never came close to actually giving up on it, being really quite curious to see just how much worse it could get. And it did get worse. Spectacularly so! While it wasn't exactly a classic in the making the film was going along fairly harmlessly and un-annoyingly (I don't care if that's a word or not!

). And then it introduces heavy blaxploitation elements, some hippies and worst of all a Jesus allegory that is so heavy-handed that I just about suffocated under the weight of it. We watch Neville's self sacrifice as he gives his blood 'so that others may live', eventually resulting in him displayed in a crucifixion pose. There is also an interracial romance between Neville and Lisa which I imagine may have been a bold move at the time in the current landscape, but feels dubious and quite pathetically created.

Following the decent opening there are a few other moments which stand out from the rest of the dross. Rosalind Cash provides quite a fiery and engaging performance as Lisa, even if she is seemingly plucked straight out of a blaxploitation flick, and stuck with some embarrassing jive talk.. And there are also a couple of entertaining scenes – a fairly well crafted motorcycle chase, and an eerie scene in a wine cellar that unbeknownst to Heston is crawling with ghouls.

With so many elements similar to Planet of the Apes (Heston as the last 'normal' man in a post-apocalyptic world, taking on mutant oppressors, captured and put on trial etc) the film feels like it is desperately trying to replicate that magic, but fails on every conceivable level.

Conclusion - To be fair to the film in its own way I suppose it does have a cheap, naďve charm. And I can just about see how some people would love it as a guilty pleasure. It's just that I didn't. Given all my problems with it, it may seem I've given it a fairly 'high' rating. That's because some of it actually is quite fun, it's just that it's rarely of the intentional variety.
» More about The Omega Man
» More reviews of The Omega Man
» More reviews by JayDee