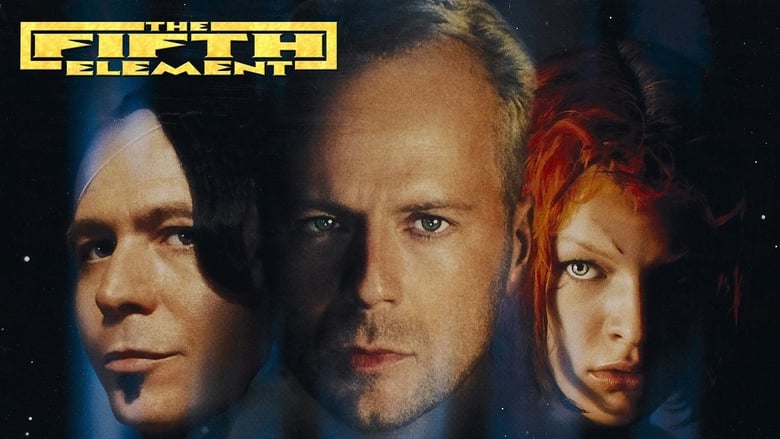 The Fifth Element is my second favourite Luc Besson film and one of his more ambitious projects. It deals with a taxi driver in the future, one day a package literally falls into the backseat of his cab. This package is a woman, a beautiful woman that he must protect because she is the fifth element. Oh, and the world is going to end.

This film is fun, plain and simple. It's a sci/fi outing that doesn't take itself seriously and has quite the impressive cast. Bruce Willis does his tough guy routine here with bits of comedic relief. Think John McClane in space, that might be how he was sold on the film. Supporting roles go to Ian Holm as Father Vito Cornelius, a man who knows a lot about the fifth element, but doesn't have the brawn to keep it protected. Chris Tucker as Ruby, a celebrity that likes to talk and talk and talk. Something that all Chris Tucker roles have in common is that he has a big mouth. Here, it's not irritating like in Rush Hour 3. Milla Jovovich is the fifth element, an orange haired female ass kicker who looks great while doing it. This role is where she got noticed.

The villain is played by non other than Gary Oldman himself. The guy is a great villain and his take on the evil Zorg is both humourous and sad. He doesn't really strike fear into your heart, but you know the man in dangerous. His outfit is ridiculous, as is almost everyone else's attire in this film, yet it doesn't distract from his evil doings.

The film is almost the complete opposite of what many sci/fi films are like, in terms of presentation and look. This future is bright and colourful, not the neon glows of Blade Runner, but the bright yellows of taxi cabs or the watery blues of opera singing aliens. This is one of the reasons why this film stands out for me, it's so vibrant and cheerful, even in it's violence.

I dig The Fifth Element and it's a great film it sit back and enjoy watching. It juggles both sci/fi and action very well and is quite funny at times. The visual effects, while not stunning by todays standards, fit perfectly well for this type of film. It's effects reflect well on the reality that is created for the film. Oh and one more thing I need to say about this flick...it also stars Luke Perry.