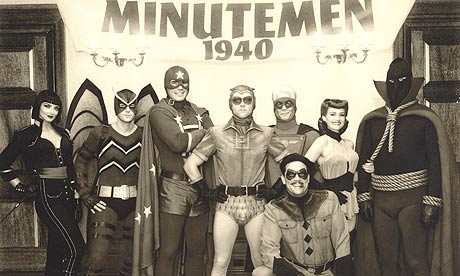 The visuals were amazing. But with Synder directing and having artist Dave Gibbons on board, the film was always going to favour the visual side of things. But on the whole I liked it, just wish there was more story from the comics. Though I suppose in movie terms it would have dragged had they added much more. That's why a TV mini-series would have made a lot more sense, and been the perfect way to adapt Alan Moore's Watchmen. A platform that would have been able to include all the subplots with Bernard and Bernie, Hollis Mason, Max Shea and even the giant squid. But whadda'ya gonna do?

For the film, I thought the new ending worked well. And though the added sex and violence was unnecessary I didn't have any problems with a lot of the minor changes. But like other MoFo's, I really didn't like the super-human abilities the regular heroes had. It works for Ozymandias, since he's shaped himself to be the perfect human, but the rest of them really didn't need to be throwing enemies around like tennis balls.

Was anyone else pleasantly surprised by Dr. Manhattan's soft-spoken voice? It wasn't anything like what I heard in my head, but it worked even better than I ever imagined. Loved Rorschach, of course. But Jeffery Dean Morgan as The Comedian really stood out as the best performance for me, by far. Even though he had limited screen time, he owned every scene he was in.

The music was good. Though some choices were a bit odd. I didn't like hearing "Ride of the Valkyries" while Manhattan and Comedian were in 'Nam, for example. Felt it came too close to parody. But I'm sure most would agree, the opening credits were incredible, stunningly so. I sat there watching them in awe the first time on Friday, and did the same again when I saw it last night.

I really enjoyed Watchmen, but that might be because of my love for Moore's comics, which at times it was very faithful to. Seeing the characters and the artwork of the comics brought to life was the real treat for me, which is why I'll probably watch it at least one more time while it's still in theatres.