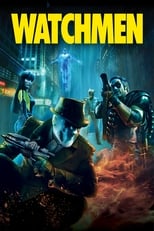 Release: Mar. 5th, 2009
Runtime: 2 hours, 42 minutes
In a gritty and alternate 1985 the glory days of costumed vigilantes have been brought to a close by a government crackdown, but after one of the masked veterans is brutally murdered, an investigation into the killer is initiated. The reunited heroes set out to prevent their own destruction, but in doing so uncover a sinister plot that puts all of humanity in grave danger.

We didn't find any linked discussions for this film. Here are the results of a quick search of possibly related threads:
675 Watchmen
This came in on 9/26/03: Hayter Talks Watchmen David Hayter (a writer on X-Men) confirmed for fans at ManiaFest that he will make his feature-film directorial debut with a movie version of Ala...
1 Watchmen...2?
Found this on RottenTomatoes today Patrick Wilson is out promoting Lakeshore Terrace this week, and so of course, Watchmen comes up (in which he stars as the second Night Owl), but...
156 Watchmen
WATCHMEN d. Zack Snyder, 2009 Well, it's finally here. After spending twenty years in development hell, Alan Moore and Dave Gibbon's acclaimed superhero story Watchmen has finally been brought to...
45 The Watchmen DVD
Yes, it is a bit early to be posting about this, but I ran across some info on the disc that I thought people might find interesting. Source: Collider Zack Snyder : The Black Freighter version of t...
23 watchmen????
What is the idea/plot behind watchmen...i need to type a paper on it by wednesday. thanks...

Iroquois While it's not really a masterpiece, [i]Watchmen[/i] is still an incredibly solid superhero flick, a faithful adaptation of an incredibly poignant story and quite simply a very good film..
READ REVIEW

Holden Pike In many ways I don't think Snyder and company really adapted it to the medium of film as they were so busy being reverential to the imagery of the book that they didn't find enough ways to make it of the source material but also let it be its own film.
READ REVIEW

Sleezy It feels like a production [U]by[/U] fans [U]for[/U] fans, and yet not so self-indulgent that it yields the book for the sake of taking over and re-imagining the whole thing..
READ REVIEW
View All (11)