Spielberg, George Lucas and scripter Philip Kaufman combine to create an homage to Saturday matinee serials which pumps up the creativity and the wit (both verbal and visual) to levels which would have never really been seen in the 1930s/40s. First, they create a perfect hero, team him up with some sidekicks, introduce a suave bad guy (Belloq, Paul Freeman), throw in a historical nemesis in the Nazis, and then to top it off, they throw in a sacred artifact of the Jews.

Raiders of the Lost Ark crams in so much action into one movie that the only one I can compare it to is its prequel, Indiana Jones and the Temple of Doom (1984). I love that film as much as Raiders, except that I can accept that Raiders was first, but even so, the intro and finale of Temple of Doom actually have more action included in it than the former film. I understand that some people hate Kate Capshaw's character, but I find her to be a sarcastic match for Indy, and this second film seems more attuned to the horror comic films (aka graphic novels) which recently seem to be flooding the movie marketplace.

At the same time, I'd be remiss not to mention Indiana Jones and the Last Crusade (1989). I know many people who love it the most, and I certainly do love it too. The intro with a young Indy (River Phoenix) has special meaning to me because I saw the film just after vacationing in Utah (and Arches National Park specifically) where it was filmed. Plus, I find Sean Connery's performance as Indy's pop the crowning achievement of his acting career, and the father/son teaming easily the greatest character relationships in the series. Still, although it's a terrific movie, it comes in third for me in the Indy sweepstakes. (That means that I give it .) 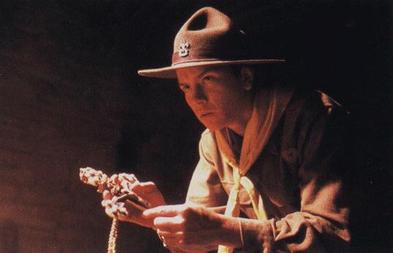