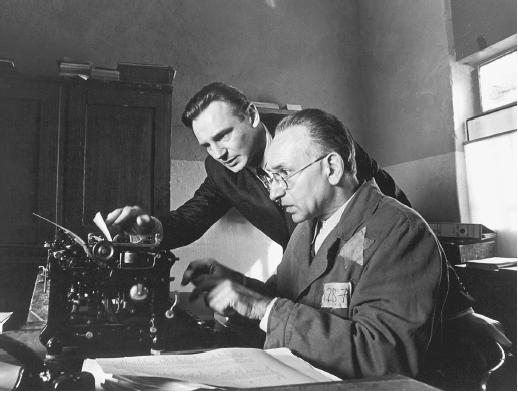 Harrowing true story of the Holocaust told through the life of businessman Oskar Schindler (a towering Liam Neeson) who joins the Nazi Party when he sees a way to make some money off the horrors of war. Along the way to acquiring his influence and fortune, he is a witness to the killings of several of his Jewish workers at his ammunitions factory and the German liquidation of the Krakow ghetto. These experiences leave him a changed man. Gradually, under the guidance of his office manager/conscience Stern (the deeply moving Ben Kingsley), Schindler arranges to "buy" many Jews who go to work in the comparative safety of his enamelworks. However, he still finds himself at the whims of malicious camp commandant Amon Goethe (the frightening Ralph Fiennes) and the Nazis' desire for the Final Solution concerning the Jews.

I find the film to be told in almost an entirely fresh way, as the story builds, from a series of brief scenes about people who we don't know at all, into a world of flesh-and-blood characters who are just trying to survive a horrible situation. The editing and Janusz Kaminski's brilliant chiaroscuro photography especially come into play as the ghetto is filled in two parts and one side is subsequently liquidated. The remaining half go to labor camps and eventually to extermination. Even in the darkest moments, there are several glimpses of humor in Steven Zaillian's script. There would be no way to survive in such an unthinkable world without keeping one's humanity through humor, dark as it may be.

I could go on for pages here, but I'm going to stop now. I'll just say that if you haven't seen Schindler's List, be warned that it truly contains shocking atrocities, and it's a hard R-rated film which most will find deeply disturbing. However, there is a light at the end of the long tunnel. I have had discussions with some people who have told me that they were personally offended because the film had a "happy ending", and that Spielberg should have chosen a darker story instead of this "Oscar bait". I respect their opinions, but I have to disagree. Of course, I don't know of any relatives of mine who were killed during the Holocaust, and if I did, it might change my perspective. However, even then, I would have a difficult time denying the cinematic power of this film.
» More about Schindler's List
» More reviews of Schindler's List
» More reviews by mark f