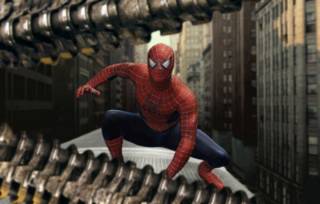 "Spider-Man 2, Better Than The First, On Numerous Levels"

Peter Parker can't seem to catch a break. Being Spiderman has brought him nothing but problems as far as his personal life is concerned. Not only that, Mary Jane is engaged to astronaut John Jameson, and Peter may lose her forever. Things are so bad for him he decides that he doesn't want to be Spiderman anymore. Then a freak accident transforms Dr. Otto Octavius into Dr. Octopus. Peter realizes that only Spiderman can stop him, but of course, problems arise. Mary Jane gets caught in the middle, and Harry Osborn, who still blames Spiderman for the death of his father, wants him dead.

Sam Raimi being the Spider-Man fan that he is, finally is able to treat the audience with a superhero movie to be remembered. Spider Man 2 goes down in history as one of those sequels that is able to out due it's predecessor.

The sequel improves on so many things that were wrong in the original, here the actors are finally comfortable in their roles, like Kristen, I didn't believe her in the first one, but this one I did. She was able to showcase her emotions more and the chemistry was there. Franco's character and performance was over-the-top. But Franco uses this to his advantage and pulls it of. Alfred Molina stole the show in this film, he was Doc Ock, perfect villain and perfect for the role. McGuire is now Spider-Man, whereas in the original, we only saw him as the nerdy Peter Parker, it took him two tries, but he finally nailed it.

I loved how it went all Evil Dead in the doctor scene, with the people screaming, then out of nowhere BOOM, chainsaw, classic Sam Raimi and a great homage to his best film to date. But who can forget the Bruce Campbel cameo, and Hal sparks of course. Was there too much comedy??? well, I'm 50/50 on that, the one scene that everyone seemed to hate, but I loved would be the "Rain drops keep falling on my head"

The little freeze at the end had my laughing, because it's Sam Raimi, he knows how to handle comedy for perfect situations. Although there was too much comedy from Peter and not enough from Spidey...I only recall one comedic thing said from Spidey, to Doc Ock in the bank...something along the lines of "Here's your change", then throws money at him. Where is the friendly neighborhood Spidey we all grew up with and love.

The train fight is one of the best action sequences I've ever seen. I was waiting for him arms to rip out of their sockets when he was trying to stop the train from crashing over the edge. The CGI is a big improvement here, it's not all goofy comic book looking, here we see a man swing from building to building, anybody notice the costume looks darker in the CGI moments, maybe it was just me but it does.

One gripe with the villain...not enough screen time. I wanted to see more of him, but whenever he's on the screen, you know it's good. It's clear that Molina is the scene stealer here.

The film though was a little lengthy, they could of taken out a "swinging moment" here and there, those were all over the place. Raimi ends the movie perfectly, setting up the third installment, with the look of "Am I doing the right thing?" on MJ's face. Nice homage to The Graduate. Raimi flushes this film full of classic homages, whether it's from his own, or just classic films like King Kong, they always add a nice touch of coolness to the film.

This is one of the better superhero movies out there, the fans of Spider-Man will enjoy and the movie goer will be entertained, this is a winner in my books