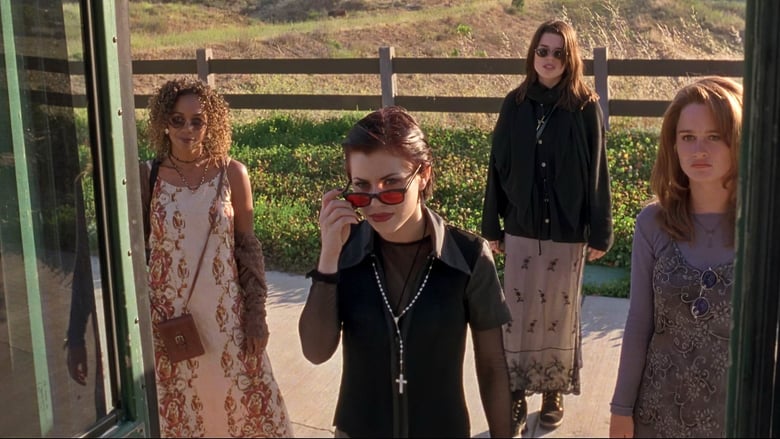 The Craft is a movie that is so much better than it really has any right being. As such, it has been a favourite of mine for many years.

Sarah (Robin Tunney) is the new girl at a Catholic high school, a depressed and suicidal loner who has trouble making friends. She finds herself falling in with a trio of misfits almost instantly. The four girls bond over their mutual tragedies in life. Bonnie (Neve Campbell)was in a fire and has burn scars all over her body, Rochelle (Rachel True) is singled out and humiliated by the other students because she is black in a predominantly white school, and Nancy (Fairuza Balk) comes from a broken home and is a victim of date rape by Chris (Skeet Ulrich), a popular football player at the school. The four are also witches. They decide to use magic to improve their lots in life, and get revenge on those who have hurt them. Sarah puts a love spell on chris, reducing him from a cocky, obnoxious player into a lovesick puppy dog with no thoughts except to make her happy. Rochelle gets revenge on a racist classmate (Christine Taylor), Bonnie erases her burn scars and gains the confidence she never had, and Nancy causes the death of her abusive stepfather, resulting in a financial windfall that improves her life. But as the coven's magic use gets out of hand and the repercussions of their selfishness come back to them painfully, Sarah has a change of heart. The trio turns on her, and a war of wills tears them all apart.

The Craft is extremely dark, cruel, and at times disturbing. The main characters are very damaged young women using the dark arts to lash out at the world that has hurt them. my one complaint is that Sarah, while being the main character, is also not as fleshed out as the other characters. She's depressed, suicidal, and she often halucinates and disassociates with the world around her, dwelling on the past, her mother's death, and her own lonliness. a lot more could have been done with her character, I think, but the film doesn't seem to have time for character study. Like most Hollywood product, it focuses on story momentum over character development, as if the two can't be equally as important. This is a minor complaint, because the film is still a good bit of mean spirited fun. Fairuza Balk gives an over the top, almost feral performance as the coven's self proclaimed leader. She is a joy to watch, her predatory smile being the most frightening thing in the film. She looks as if, at any moment, she might rip your throat out with just her teeth. The director seems to LOVE Fairuza Balk, and she gets many of the best scenes (and lines) in the film. Neve Campbell and Rachel True are also good, and Robin Tunney is likeable as the film's heroine and shaky moral center. Skeet Ulrich adds very little, other than that he looks like Johnny Depp.

The screenplay by Peter Filardi and Andrew Fleming is better than it could have easily been, it makes you care just enough for the characters to get you involved with how it turns out in the end, and gives a few fun jolts along the way.