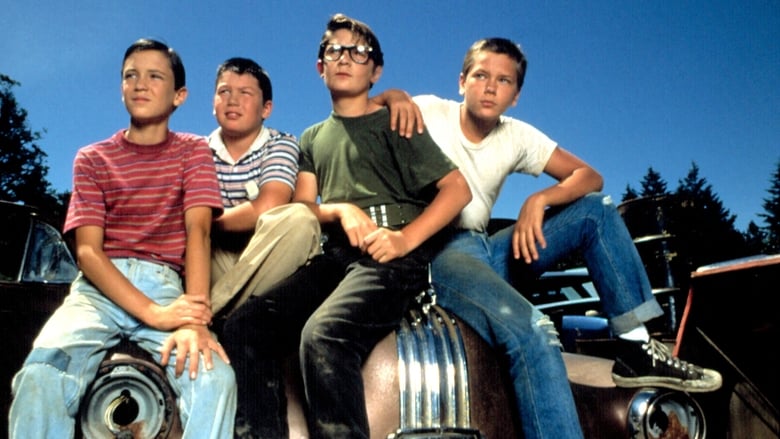 In the late 1950s a group of pre-teens--Gordie (Wil Wheaton), Chris (River Phoenix), Vern (Jerry O'Connell), and Teddy (Corey Feldman)--hear a rumor about the location of the body of a dead child. Determined to see the body, and possibly claim credit for its discovery, the boys set out on a trek to find the dead boy. Hanging over the boys are their challenging home lives and a gang of older boys (led by a sadistic Kiefer Sutherland) who may also be interested in the body.

This is another movie where the story and my response to it were not quite what I'd expected.

When I was growing up, I didn't have the kind of friend group portrayed in this film. I've always been more of a loner, and so running around unsupervised and going on adventures just wasn't part of my childhood. At the same time, however, I connected with this film on several levels. The first is that so many of the issues faced by the boys--death in their family, a mentally ill parent, being judged by the actions of one's family--are things that my students have experienced. In this film I saw mirrored so many of the boys who have passed through my classroom--I recognized their grief and their struggle and their resilience. And on another level, I think that a lot of people can connect with the idea of the pains of growing up, facing an uncertain future and wanting to be loved and appreciated.

When I've read plot summaries of this film, it's always been presented as the boys going to find "a dead body". I had always assumed that this was the body of an adult. But the body is that of a 12 year old child who wandered off while picking blueberries. This adds a totally different tone to the picture than I expected. These boys are not only being confronted with mortality, they are being shown an explicit example of the indifference and cruelty of the world, even toward children. Importantly, all of the boys have already had a taste of that cruelty, and so their quest feels less like a discovery, and more like a confirmation of something they already feel and suspect.

The film has a lot of elements that I normally don't love in a movie: voice-over narration, flashbacks, and slow-motion. For the most part I felt that it worked here because the film is so deeply entrenched in the subjective point of view of the boys. The sequence in which we watch the visualization of a story that Gordie is telling the other boys was a good example of something that barely squeaked by for me. Much more effective were the flashbacks, revealing the way that Gordie's life has changed since the death of his older brother (John Cusack!).

The heart of the film is obviously the boys and their relationship. While they all have good chemistry with each other and solid comic timing, Wheaton and Phoenix are the standouts as the two central figures. Wheaton plays Gordie with vulnerability and intelligence. Gordie wants to be a writer, but his family (and seemingly the whole town) can't help but compare him to his football star brother. Gordie must deal with both his grief at losing his brother (who was his main ally) and the indifference and even contempt that he receives from his parents. Phoenix is equally strong as Chris, a sensitive soul whose criminal family has put him on a path and led everyone to expect the worst from him. Gordie and Chris take turns comforting each other, and the portrayal of their friendship is touching and memorable. Each boy experiences a sense of doom, while at the same time lifting up the other. In a meta sense, this dynamic is doubly painful knowing that Phoenix would only live a mere 7 years after this film. Toward the end of the school year I was talking with two of my students. One of them said, " I think girls have more emotions than boys." I asked, "Do you think they have more emotions or do you think they show more emotions?" and this other boy jumped in and was like "YES! You're not supposed to show how you feel. You're just supposed to be tough and be quiet." Anyway, I love seeing a film that shows boys in particular productively expressing their fear/anxiety/sadness and getting support from their friends instead of derision.

Any complaints I have are very minor. I already mentioned having mixed feelings about some of the sequences that take us away from the boys. I also felt as if the dynamic with the gang of older boys was left a bit unresolved, especially as they are the threat that drives the action in the third act.