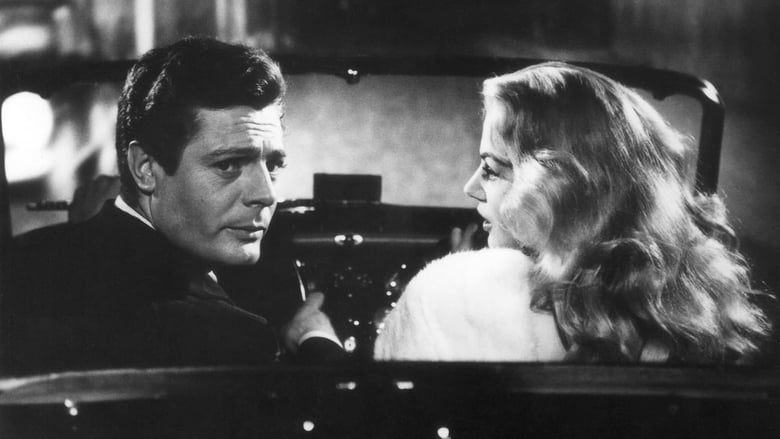 In a series of sequences that take place through nights and days that have indeterminate gaps of time between them, we follow the exploits of a journalist/newsman named Marcello (Marcello Mastroianni) and especially his various interactions with and pursuits of different women, including his fiance, Emma (Yvonne Furneaux); a glamorous movie star, Sylvia (Anita Ekburg); and a wealthy heiress, Maddalena (Anouk Aimee).

This film, to me, was almost three hours of watching a man in the midst of a mid-life crisis. Marcello is not happy. And he cannot seem to figure out exactly what it is that he wants, often filtering his unhappiness through his relationships with the different women. The nature of his work seems to exacerbate this problem--everything is a performance, a play. People become objects to be photographed and followed.

It is interesting to watch the way that Marcello expresses his own frustrations through the relationships with the different women in the movie. After having a fling with Maddalena, he returns home to find that Emma has tried to kill herself. "Why would you do it?" he demands, you know, literally hours after he has slept with another woman. Sylvia's free-spirit vibe seems to offer some escape, but even this is eventually revealed to have a calculated element. The women in Marcello's orbit all seem to have something that he wants, and yet he is let down by all of them. I'm not entirely sure Marcello himself knows what he wants. A scene toward the end of the film, in which Marcello covers a woman with feathers and, when she doesn't do what he wants, looks genuinely angry and hits her in the head with a pillow in a way that is a bit too aggressive. He rails at Emma at one point that he cannot stand her oppressive, "maternal" love, and yet he is put off equally by the more frivolous behavior of other women. (A sequence in which a man describes the perfect wife as being like a "lover and a daughter all at once" is, I think, intentionally gross. I hope.)

The main downside of the film, for me, is also something that I think is intentional. The sequences of the characters partying and hanging out get repetitive at a point (maybe around the second full hour?). But, kind of like something like Jeanne Dielman, the repetition almost felt like part of the point. Marcello is in this cycle of attending these parties and events, seeking something that he doesn't seem to realize might not be romping around holding a glass of champagne. Marcello seems trapped by his idea of where he will find happiness, and cannot pull himself out of his narrow world-view. He gets angry at the people in this world (himself, the women), but cannot seem to break free of it. There was something kind of pathetic watching the way that Marcello was constantly hitting on any woman who came into his orbit, seemingly hoping that she will finally be "the one".

Between the gorgeous photography and the slightly dreamy way that the film moves through time, I can see why this is a classic. I'm not sure how often I would want to revisit it, but I enjoyed it.