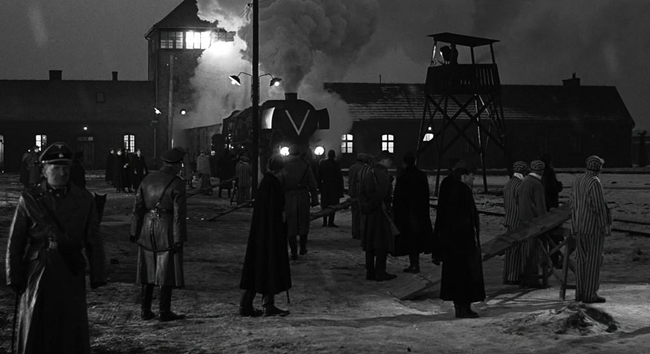 
"In German-occupied Poland during World War II, industrialist Oskar Schindler gradually becomes concerned for his Jewish workforce after witnessing their persecution by the Nazis."

That's the real Auschwitz death camp that Spielberg used in the film as seen in that screen shot. I don't even have to look that up as I instantly recognized that distinctive building with the train tracks running right threw the middle of it. And the cement ramp that takes the poor souls down to the showers, that was real too. Auschwitz must have been a hauntingly eerie place for the cast & crew to work in as so many humans were gassed to death in the showers...Then cremated in giant furnaces that ran non-stop. It's mind boggling that the holocaust could have ever happened, and yet it did happen...Spielberg pays the victims & the heroes their due respect with his film Schindler's List.

Spielberg gets kicked around a lot here at MoFo. Gawd knows I've taken pot shots at Spielberg for his big budget blockbusters with their syrupy sentimentalism and feel good moments...But damn if Spielberg didn't step away from his usual fare and instead gives us a pictorial history in film form of the events that led to Oscar Schindler saving so many Jews from certain death. The film is almost void of Spielberg's trademark 'tugging at the heart strings moments' and instead he made a film that's very European feeling in form and look. The story is presented like a French New Wave film where the narrative isn't as important as the symbolism and visuals are. It's not a typical Spielberg film at all and for stepping outside of his usual film making style I respect him.