"You could not live with your own failure.
Where did that bring you? Back to me."

Now that doesn't make it a bad movie, I wouldn't even necessarily call it a bad sequel, but it fails to deliver on the previous cinematic powerhouse.

Like it's predecessor, it's highlights are it's action sequences, but unlike it's predecessor, most of it's action is confined to the last 3rd of the movie. The first two thirds are mostly sluggish exposition on where the Avengers are now, how society is managing in the wake of what I'll call "The Snap" and whatnot. It's largely boring, I'd say, and mustering the remaining heroes for another go at Thanos is a predictably weak exercise in feigned futility.

But once they do they get going, boom, Thanos is just suddenly decapitated, it's discovered that the Infinity Stones were destroyed offscreen and it was all futile in the end anyway. Fast forward 5 years.

Whoa, really? What the ****? That's such a muddled rush to a climax. It throws me off, and since I know that can't be the end it just bothers me that they wasted a Thanos death scene and comeback one-liner on it. Now it's gonna affect me less when actually does die. That kinda deflates my sails, movie. So anyway, it's 5 years later and out of the blue Antman (a movie I haven't seen) shows up and just proposes time travel I guess. Suddenly it's "Let's Kill Thanos Again" time and the movie basically repeats again.

Perhaps the only mildly acceptable sticking point here is Tony Stark who managed to start a family with Potts in 5 year timeskip, but you know he's gonna sign off on it anyway and it's at least reasonable that regrets over Peter Parker drive him to into irrevocable consideration.

So boom, they got a time machine, and instead of time traveling to when they were fighting Thanos in the last movie to literally double their numbers, or even to a period before Thanos decided to get the Stones to stop him then, they go on this whole spiel about how they can't do this or that because "time travel isn't like in the movies". They even refer to Back to the Future being wrong, but then proceed to explicitly follow Back to the Future's time travel logic with ultimately no explanation as to how they can't do what is being proposed.

Clearly the writers had a specific solution in mind and they weren't overly concerned with exploring time travel seriously, as Back to the Future did, but they clearly aware of the rational objections enough to give it a backhanded reference. Kinda ****ty writing if you ask me.

And sure enough, deciding to seize the Stones during altercations in the previous movies ended up being extremely costly, it attracted Retro-Thanos' attention and he ended up with them again anyway.

Of course, the ultimate villain isn't defeated without an ultimate hero, and Captain Marvel shows up to make small change of a number of obstacles. Not having seen Captain Marvel, I was resistant to seeing the character be the insufferably cocky jerkass I expected her to be and she initially was. By around the final battle when she's single-handed destroying Thanos' mothership I have a moment of appreciation, where I consider her to be the Badass Action Girl #1 she should have been. 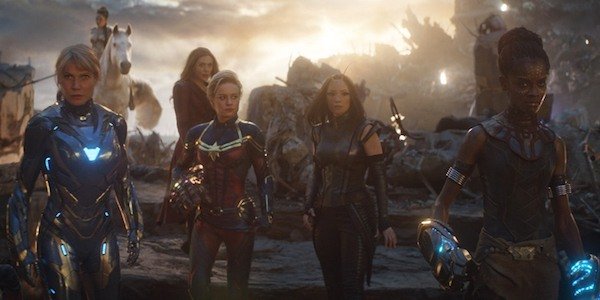 BUT THEN, the movie literally frames her in a group shot with all of the female superheroes. ******* IT, you couldn't leave well enough alone, could you? You couldn't just have a cool sequence in which a cool female character does something cool, you gotta highlight the moment by throwing every diversity token onscreen at the same time to virtue signal to us, huh? UUGGGGHHHHHH!!!! I hated that.

Most of those characters have only peripheral roles to the overall story too, so you're basically begging the audience to notice how heavily sidelined the female cast has been!

And that's fine, the superhero genre is dominated by male characters and that's fine... but when YOU have an issue with that, stop beating us over the head with it, especially when you're guilty of the very thing you're advertising you're so heavily against!

And by the end of the movie Thanos dies, as you'd expect, by a Deus Ex "I grabbed all 6 Infinity Stones when I grabbed you" move that immediately set off my bull**** detector, sooo CRUMMY checkmate move there.

Thor begins and ends the movie as an unattractive fat ****, because that's what I wanted one of the main characters to devolve into for this movie, a shut-in with a beer belly who literally plays Fortnite... I cannot imagine how many groans that got out of audience members when they saw that ****.

And then it all ends with, what I can only assume is one big reference to one of the Captain America movies which I didn't see because a superhero based on American patriotism just makes me gag.

To be fair, Captain America: Civil War is basically an Avengers movie, and it introduces Spider-man, but really there are so many references to other movies here I don't expect the majority of viewers to know who even half of these characters are when they show up.

So the ending was wasted on me, because I didn't see what is in all likelihood one movie among literally dozens that have been released in this setting. So yeah, an anti-climactic ending with a completely unnecessary closing monologue by Tony Stark, a sluggish beginning that's only marginally more interesting than the first Avengers...

This is definitely the most anime I think I've ever seen western big budget animated action movies, but, the high points, I feel, don't sufficiently outweigh not just the negatives, but the failure to maintain the momentum and intensity of the previous movie.

EDIT: I'd also like to state that as the highest grossing quadrilogy of movies to date, I think OG Star Wars and The Lord of the Rings are far more deserving series.