"As far back as I can remember, I always wanted to be a gangster." 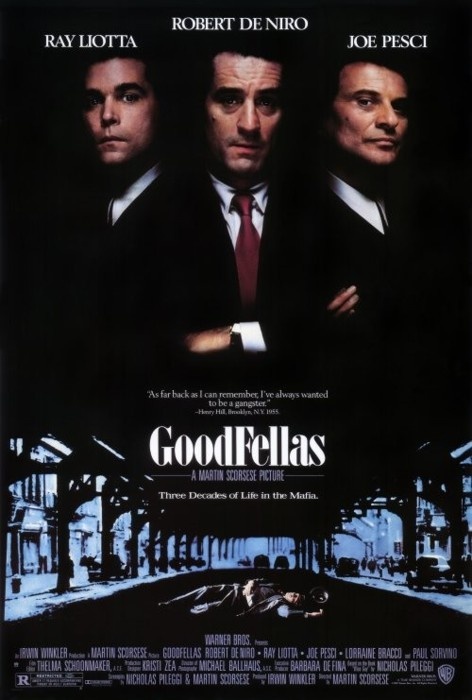 Well, this Scorsese Week has been fun. I got through a ton of movies by one of my new favorite directors, and I got to see some brilliant performances by Robert De Niro. For the last movie of the week, I'm going to review his most famous movie (using imdb votes as criteria), Goodfellas. This is one of the first Scorsese movies I've ever seen, and I can always find something to get a kick out of in this movie. Next to The Godfather, Goodfellas is one of the most essential gangster flicks in this world, and is better than most of Scorsese's Brat Pack-era catalogue.

Goodfellas is the true story of real-life Irish-Italian gangster Henry Hill, who got in the business at a young age and would rise through the ranks with the help of famous gangster Jimmy Conway. At first, the gangster life is the dream all humans wish to achieve, but when you're involved in a dirty business, you've gotta take risks. After being sent to prison for a few years, Henry takes on a new cocaine business and calls in his old partners to help, but that soon takes the worst possible spiral downward.

Before this Scorsese week kicked off, Goodfellas was the best Scorsese movie I had seen, not counting his documentaries (if you do, his best was The Last Waltz). Exluding the docs, this is his second best movie, but it's no less essential for the gangster fan. I'd know. Goodfellas is one of the movies that taught me to love the gangster genre. Part of that is watching how the hypocrisies of the gangster world, glorifying themselves and having such high-standards for their strange moral code while treating everyone else like crap, ends up biting them hard in their stick-ridden asses. Watching these kinds of ending is appealing to me, especially since I can hardly bring myself to watch movies where that kind of attitude does not pair with comeuppance like in racially troubled movies like The Human Condition. Henry Hill's journey from successful gangster to the land of downward spirals is a fun and interesting journey due to the number of routes it takes to get there, like a road movie.

Since the movie has a lot of ground to cover, it has a lot of characters to affect the lie of Henry, and many of them have some great development. I especially loved Paulie's character, being both a wise man capable of great advice for his workers and a behemoth who could intimidate you with nothing but a stare and a slow movement. He was the standout for the minor cast. I liked the subplot involving Henry's wife Karen, and I was happy to here her taking turns narrating the movie with Henry for the sake of world-building. One of my favorite scenes in the movie was when she was complaining about all of the other wives in the business talking about the terrible things that happen in that world.

Funny; the side cast was able to stand the test of time along with the primary cast. Robert De Niro performs Jimmy Conway perfectly, even though I wasn't amazed with the role like I was with his roles in Taxi Driver, Frankenstein and Cape Fear. By that point, Robert De Niro had played so many gangsters that the role felt standard. But he still rocked the movie, along with Joe Pesci who was the sleaziest little man in the gangster world. I loved him and hated him at the same guy. His performance was excellent and comedic, but I don't want to spend five minutes around this guy. Actually, I should say that it's a shame Ray Liotta'sd performance as Henry Hill felt overshadowed by these two, but to be fair, he was competing with De Niro. He played a great Henry Hill, anyway.

The cinematography and music were excellent. The music mostly relied on oldschool songs from the ages of rock 'n' roll, jazz and R&B, which is a kind of soundtrack that I am almost romantically attracted to. And the cameraman, Michael Ballhaus, who worked with Scorsese in the past, produced some of his finest moments in this film. This is the guy who filmed the brilliance of Coppola's Dracula a few years later, ands by this point he's become one of my favorite cameramen. However, like I've mentioned before, there were a couple of scenes I that dragged on. I remember the scene in Pulp Fiction where Vincent and Mia were going into that oldschool restaurant, and it was a visual treasure due to its depth and 50's-60's atmosphere. When Vincent walked around the restaurant full of 50's memorabilia, tables inside cars, and waitresses dressed as actresses, he was soaking in this whole new place on Earth. And then we have a scene in Goodfellas where Henry and Karen were walking through a boring kitchen just to get to a restaurant. Boring.

Goodfellas is a fun, dramatic, and sometimes funny movie. Yeah, I think it's funny and I always considered Joe Pesci a clown for my amusement. But no, really. Goodfellas is one of Scorsese's finest films, and a movie that shows him at his most "Scorsese," which means he's come into full bloom. If you wanna check out the gangster genre, or get more familiar with Scorsese movies, Goodfellas is long but it's a wonderful start. This is the second best movie I've reviewed during Scorsese Week.