by CiCi
posted on 9/06/18
in
Since I'm taking part in the B movie HOF part 2: electric boogaloo it seemed appropriate to revive this thread. And since he's hosting the whole thing, I decided to start with Joel's nom 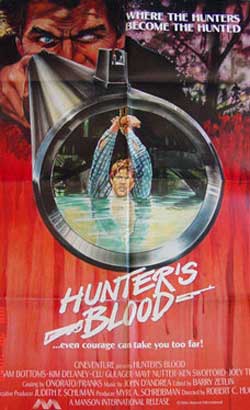 Votes (at time of writing): 553
Budget: N/A
Director: Robert C. Hughes
Writers: Emmett Alston, Jere Cunningham
The movie follows a group of five men from the city, who venture out into "redneck country" to hunt some deer, and drink some beers. After pissing off pretty much everyone they run into, the group become the hunted!

Positives
Where do I start? The opening alone is a gem. From starting with a shower scene so tame it looks like it was sponsored by the Catholic church, or the opening car ride with an oh so 80s beat humming in the background to shots of a pick truck reminiscent of a Camaro ad sponsored by the NRA. The dialogue, on the whole, manages to straddle the line of being absurd without being nonsensical or outright dumb. I laughed more times than I cringed at the random professions of love, or overly long debates on guns that wouldn't look out of place on Newsnight. Maybe it's dated well, or matches my admittedly odd sense of humour, but the whole affair seems self aware and tongue in cheek. It knows it isn't going to be the next Deliverance and instead just has fun.

The music! It wouldn't sound out of place in an 80s bar. I wasn't around then but I'm guessing it's the kind of music you wouldn't hear at an it place in Manhattan... or any bar in New York state. It'd be that run down, bar/club/restaurant multi purpose joint down the street that you keep meaning to try out, but it looks a bit seedy and any beer being sold for $2 surely must be a bit dodgy. That kinda place. It was vastly out of place here, but at least I could beat to the sound of men running around in a field.

Speaking of inappropriate, we move on to the acting. It too was wildly inconsistent. Luckily the bracket of acting ranged from passable to chewing the scenery so much you need veneers. Seeing that hillbilly whine over his dead son with a god awful accent and mix of emotions as though he didn't know which one to choose was glorious to behold. The actors seemingly not knowing whether this was a spoof or a piece of profound social satire only added to my amusement as a viewer.

Negatives
Holes and flaws are kinda expected with these films, it adds to the charm most of the time. Nonetheless, this did have some inconsistencies that did not have said effects. The most apparent of which was that it suffered from too many cooks some of the time. Towards the middle a surge of new characters just appeared, most of whom were flat, adding little to nothing to the mix. Then again, seeing some random character enter a shot to get that precious screen time couldn't help but make me smile.

Like I mentioned above, I loved the humour of the opening. But the build up and aftermath for the next hour or so following this is also pretty decent. It captured my attention, and a part from a bit of unnecessary dialogue here and there, it kept a hold of it. But the action quickly got repetitive, and the parallels to Deliverance kept coming thick and fast around the same time as well. It lost momentum fast and it didn't really manage to pull it back. I was thankful when it ended.

Overall thoughts
This reminded me of a poor man's Deliverance/Faster Pussycat (there's a bunch of chases in there). It was fun and cheap (like me) and very much a product of its time, which adds a layer of charm when viewing it retrospectively so many years on. It has so many humorous aspects to it, many of which I don't know were completely intentional or not, which amuses me even more. IMDb currently has this rated at a bang on 6.0 which seems fair to me. So I'll give this