by TheUsualSuspect
posted on 5/18/18
in
Avengers: Infinity War 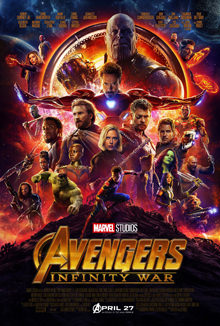 The first Avengers film set the bar high for future Marvel flicks. When it was first announced I laughed at the concept and claimed it wouldn't work. Then they announced Joss Whedon as the director and I became increasingly optimistic. The film was a success in my books, managing to juggle multiple characters, while maintaining an engaging story that was entertaining and funny. Seeing all these characters on screen together for the first time was refreshing, exciting and challenging. When the sequel, Age of Ultron came out, it was met with a less than thrilling response. It was more of the same. The freshness of seeing these characters on screen together was gone. We got more of the same and a villain that did not seem as grandiose of Loki. While still a good film, it didn't meet the high expectations and felt like filler in a sense. Now we enter Infinity War, the first half of "one" film. This is the 'ending' film that the entire series has been building towards (I say since Avengers, others say since Iron Man).

Now we are juggling even more characters. Looking back at the first, there were six Avengers. That seems so incredibly small now compared to what Civil War and now Infinity War has thrown at us. How the Russo Brothers managed to find enough time to justify everyone's presence is beyond me, but it works. It helps that the heavy lifting for this film was done with every single film that came before it. Without those stand alone movies, none of the character interactions would work. None of the emotional beats would work. Take notes Justice League.

Thanos is looking for those darn stones again. This time he's actually putting the work in himself. He's collected a few so far and coming after the rest. Once he gets them, he plans on wiping out half the universe's population. Can the Avengers, who have since broken up since Civil War, manage to come together and save the world?

While the film does feel incomplete in a way, I was okay with how it all went down. This is more of a film about Thanos than it is The Avengers. Brought to life with a great performance from Josh Brolin, he blends himself effortlessly with the CGI creation. His interactions with Gamora are some of the best stuff in this film. That incompleteness is a double edge sword. I applaud the boldness of the ending, but it also has no emotional weight for me. With how the marketing machine works, we all know what is down the pipeline for those characters and their future films. One the initial shock wears off and you think about it, it feels like an empty promise. Only time will tell how bold that choice was, I'm leaning on the not so much side.

The film is 2 and a half hours long and it doesn't feel like it. This film hits the gas pedal from the very beginning and it never lets go. I was surprised at how fast the film was getting to the action and how well paced it all felt. At times it does feel rushed, Thanos has been after these stones for almost 20 films now and it all happens in one. Some plot points are glossed over in expository dialogue that I felt could have had some more resonance with some imagery, but as a whole the film works.

I felt like the film was concerned with making the action the central focus. It wanted to have a lot of 'cool comic book moments' for fans and worry about the plot progression later. I'm okay with this, since the plot was fairly singular in its focus. Thanos needs dem stones as my friend put it. So the vast fan-base will be in awe of the action pieces where they get to see Thor being a bad-ass, Spider-Man geek out at his costume, Dr. Strange dazzle us visually and the most interesting aspect to me, new character interactions working together. Seeing Strange help Quill fight Thanos was fun. That's the main takeaway from this film, it was fun.
» More about Avengers: Infinity War
» More reviews of Avengers: Infinity War
» More reviews by TheUsualSuspect