by Yoda
posted on 2/17/18
in
Every filmmaker has a range of outcomes.

A David Mamet film, for example, will not be a deeply moving character study or a special effects extravaganza, but will be at least moderately entertaining. A Steven Spielberg film, on the other hand, might be anything from Jurassic Park to Schindler's List to Hook. In nearly all cases there is a trade off between range and quality; like a restaurant with an unwieldy menu, breadth often comes at the expense of mastery. I am more likely to enjoy a Mamet film, but a Spielberg film is simultaneously more likely to be adored, or a bore.

Whether a director is constantly reinventing or constantly refining, the question is what they're capable of at their upper bounds. Even the best possible version of a Uwe Boll film will not be good, nevermind Oscar worthy. But the best version of a Quentin Tarantino film is, even while its worst version is borderline schlock.

Tarantino is a good comp for Martin McDonagh, whose fondness for elevated brutality follows the same black-and-blueprint, and who has perhaps realized the upper bounds of his potential in Three Billboards Outside of Ebbing, Missouri.

The recipe here is still McDonagh's (if you vibed with In Bruges, you'll like this) but there's a pinch and a dash of Coen Bros. this time that elevates the offering. The pinch is composer Carter Burwell, veteran of a dozen Coen productions, who brings a welcome habit of pulling the score back and letting perfectly-chosen songs take its place. The dash is Frances McDormand, who's actually hitched to one of the brothers, and whose grief-stricken Mildred feels a little like a version of Fargo's Marge Gunderson after she's lost everything. Both of them got their start with the Coens' Blood Simple, and both marry well to McDonagh's love of absurdity, both comedic and violent. This is the kind of film where people try to wound each other with words, and then go ahead and wound them literally anyway.

There are occasional attempts to interweave race relations and police brutality into the story, but they don't amount to much, and sometimes feel like they're there only because their absence would seem conspicuous. The screenplay has little to say about these issues except that nobody involved is as simple or cartoonish as they seem, which is both true and trite. 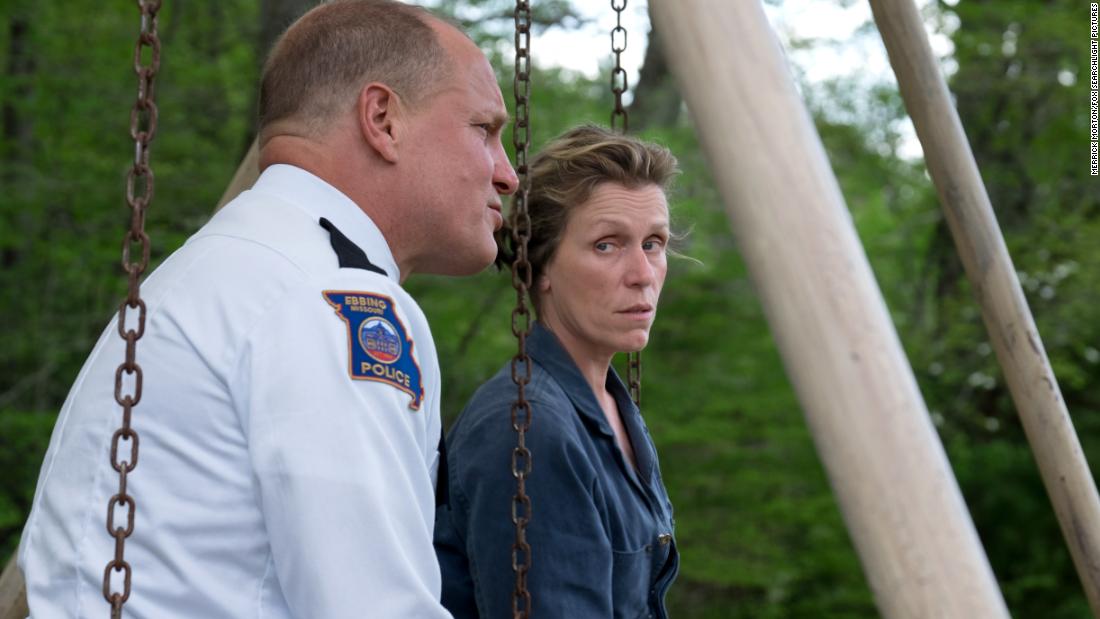 Three Billboards is equal parts simple and elaborate. Simple in that the conflicts are clearly defined, and elaborate in that the characters act as if they'll be won by whomever makes the most shocking and dramatic gesture. The narrative is shoved forward by people trying to one-up each others' trauma. If there's anything to criticize here, it's that there is perhaps one plot-propulsive event too many. As good as this film is, it's easy to imagine a more restrained version that's even better. The use of an isolated flashback stands out as a particularly strange choice, out of sync with the rest of the film.

There is, at times, a sense that the heartland is a strange and lawless foreign place, as if the frontier reached the coast and bounced a couple thousand miles inland. This is a crockpot spaghetti western (or Midwestern, if you prefer); there are lingering shots of skies and scowls, of clouds and countenances, and the paradoxical blend of wide open places and towns that ain't big enough for the two of us; the High Noon of low places.

People die before and during this film, are scarred literally and figuratively, and yet the characters push the weight of the world off their shoulders enough to make room for each other to lean on. This is not a film about dying. It's a film about how hard it is to keep on living with everyone else.