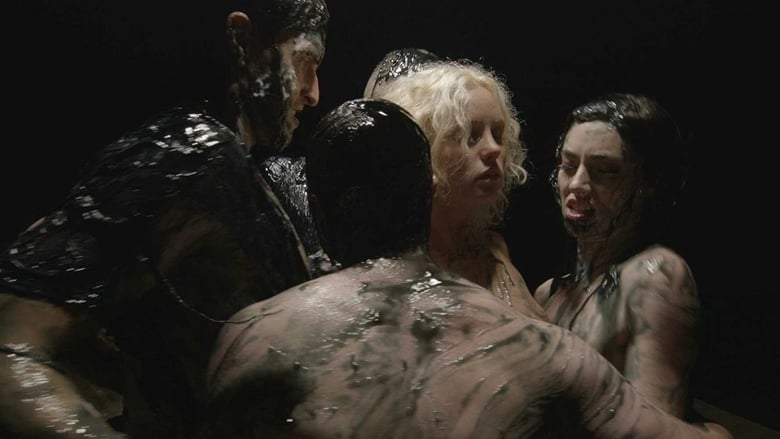 Votes (at time of writing): 222
Budget: N/A
Director: Scott Schirmer
Writer: Scott Schirmer
In case you're wondering how I even stumbled across this, I follow Tristan Risk on twitter, and I remember her tweeting about this quite a lot when it was released, then it just took me over a year to actually watch it

But the plot follows 5 twenty somethings retreating to a remote lake to celebrate one of their birthday's. Yet once arriving, they slowly become entranced and influenced by the forests around them where they begin to engage in some disturbing behaviour.

Well, considering Ms Risk was the only one I had heard of before seeing this, I was somewhat surprised by the acting. After scanning their credits, quite a few of the principal cast only have a few credits, and even then, this marks some of their first ventures into feature films. Tristan Risk always plays enigmatic, quirky characters, and this is no different, and her distinct Canadian accent amongst a group of Americans makes her even more different and alien from the rest, however unintentional that probably was. Even so, she's a scene stealer from the get go, conveying a sexual, wild aura that fits the tone of the film perfectly. I was less impressed with some of the other actors, but on the whole, this is cast well, and the group do share an undeniable chemistry.

Moving on to sexuality, the film isn't restrained when it comes to nudity, but what B movie is? Nevertheless, it's not present simply to titillate or to put some T&A in there, it's used to clearly display that something eerie and creepy is at work. The group of friends that the film follows are highly sexed, but their interactions after venturing into the lake for the first time seem incredibly impulsive, forced, and unnatural. It is a sexual film, and even the plants that start spurting all over the place are overtly phallic. I feel like I might have missed the point of it all to be honest, the whole portrayal of sexuality reminded me of It Follows in that I think it's condemning promiscuity, but it's too vague and contradictory overall to definitively state that. I should probably watch it again, and at 77 minutes, it isn't a long watch!

The cinematography was gorgeous on this film, I couldn't find the budget for this film, although I'm guessing based on the minimal cast, and the single location that it was fairly small, but it honestly doesn't look like it. It enhances the sublime nature of the environmental setting wonderfully, and it makes it all look idyllic and serene, even though it's far from it. It therefore creates this juxtaposition between what we see, and how it's twisted by the cinematographers, making it all the more unsettling.

Finally, the soundtrack, and this is a big grey area for me. It is unsettling, unique, and actually quite marvellous... but it's relied on a bit too much. I know that's ironic since I adore Suspiria, but the thing is, the music doesn't always match what is on screen, and so it's a bit of a head scratcher on this sense.

I have to mention this first. So, towards the end, there's a bit of a confrontation, and a "fight" ensues. Dear lord, it's one of the tamest things I've ever seen. It was more Anne of Green Gables than The Raid and it was massively off putting from what had been a thoughtfully paced and constructed film.

Anyway, moving onto the actors. It was a mixed bag, Ellie Church was pretty mediocre, and I can't even remember the names of the male actors, because each one of them was quite forgettable. I make it sound worse than it was, the acting wasn't Tommy Wiseau standard by any stretch, but I'd say it just about sufficed on the whole, it didn't dazzle me.

As for the writing, well it explores sexuality confidently, and that alone makes it somewhat unique, but like I mentioned before, I feel like it's trying to hint away at some hidden message, but I couldn't really pick up on anything. And if you can't pick up on something here, then essentially this film is 77 minutes of double entendres, phallic plants, and full out sex.

The creature effects were a bit meh overall as well. But they do.

It has a lot of promise, creativity, and heart. But it's still quite mediocre on the whole. Nevertheless, I feel as though this film deserves a re-watch, because like I said, I feel as though I'm missing something that is meant to be there.