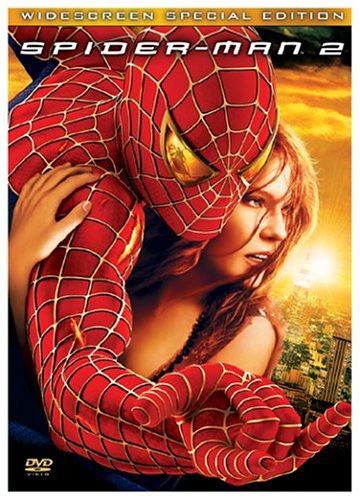 Sam Raimi's ambitious direction is the primary asset of 2004's Spiderman 2, the sequel to his 2002 hit that, despite some minor plot contrivances and credibility issues provides solid entertainment for most of its running time.

This film finds Peter Parker (Tobey Maguire) dealing with everything in his life going wrong...he's lost his little part-time job, the girl he loves, MJ (Kirsten Dunst) is marrying someone else, he's flunking out of college, and he's moments from being thrown out of his dingy rented room because he's behind in his rent. Meanwhile Spiderman has to deal with Dr. Otto Octavius (Alfred Molina), a brilliant scientist who has developed a fusion energy source mechanism that consists of four huge mechanical octopus like tentacles that the "Doc Ock" loses control of and finds himself the unwitting commander of a seemingly unstoppable killing machine. Issues that Peter has with best friend Harry (James Franco) also come to light.

Sam Raimi and screenwriter have mounted a story that initially annoys but works once it gets going. The film spends way too much time dumping on poor Peter Parker and just when you think there's nothing else that can happen to him, Spiderman loses his powers and gives up crime fighting but we're supposed to accept the fact that the second that MJ is in danger, his powers magically reappear? However, there are some moments of real sadness and pathos that really register...I loved when Peter attempts to get his powers back by trying to jump over the top of a pair of buildings, fails, and hurts his back...the sight of him walking between the parked cars in the alley holding his injured back was one of the saddest things I have ever seen. I also loved at the end of the hard to believe stopping the train sequence that it took everything out of Spiderman and he literally collapses in the arms of the passengers...a beautiful reminder that this super hero is human, which is sometimes easy to forget. 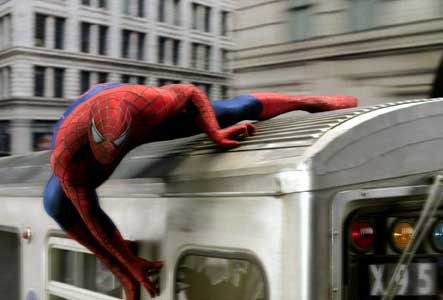 The film also brings up a lot of question regarding the sanctity of Peter's secret identity and doesn't really provide answers. It is implied that Aunt May (Rosemary Harris) suspects who her nephew is, but never voices it...MJ tells Peter that she suspects it, yet we're supposed to believe that Harry had no clue? Harry's shock at learning the truth was a little hard to swallow but what it led to was brilliant...a perfect set-up for a third film.

Tobey Maguire once again brings a beautifully human aspect to this super hero and the offbeat casting choice of Alfred Molina as Doc Ock was inspired...I loved that Doc Ock had a conscience and that he didn't want to cause all the harm he did, including the death of his wife (Donna Murphy), and even in full villain mode, Molina always conveyed Otto's lack of control in the situation and I love the glance of his humility we are provided near the climax. The movie takes awhile to get going but once it does, it's a fun ride and I never found myself looking at my watch.
» More about Spider-Man 2
» More reviews of Spider-Man 2
» More reviews by Gideon58