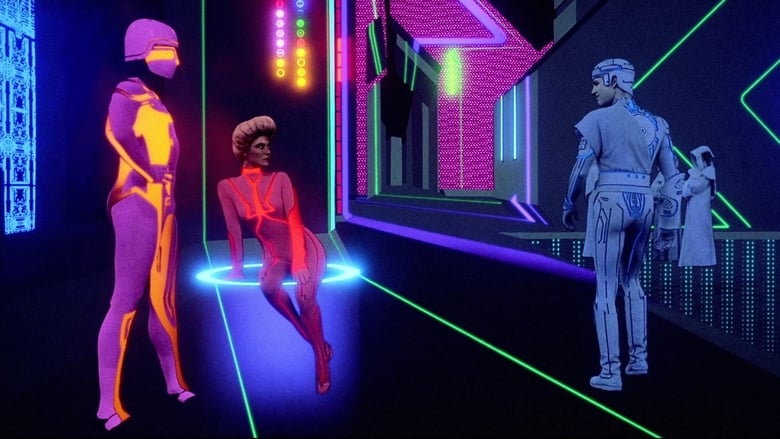 I wasn't able to finish watching it the first time I saw it. What with all this 80s stuff, now seems a good time to wrap it up.


WHAT'D I THINK? *SPOILERS*
Having now completed Tron, I get the feeling that had I actually seen it all the way through back in the day, it would easily have become one of my favorite staples.

Clearly, Tron's visuals are accomplished in a variety of ways, those foremost being 3D modeling and rotoscoping. Where either would prove excessive or impractical, the sets are designed to conceal their surfaces and textures and are probably brushed over in post to better contrast their light and dark patterns from rogue lights.

The rotoscoping is done very well. It looks quite dated now of course and the human characters stand out with a gross amount of texture, but they clash mostly with the 3D models which is technology still with one foot in crib and the only way it barely manages to get away with it is the explicitly computer-generated setting they exist in.

Enough about the visuals though. As much as I may geek out over how it looks, it's not just eye candy, it's trying to be a movie. So how does it work as a story?

It's... serviceable. In a bare minimum kinda way.

A lot of the dialog is spattered with computer jargon which will simultaneously goes over the heads of people who don't get it, clash with the understandings of people who do get it, and frequently just venture directly into Star Trek-style technobabble.

This is odd to me considering that being one of the first movies to seriously invest in 3D modeling the creators MUST have had some reasonable idea of how these things work, so I feel like either the writer was either completed detached from that creative process or they felt that they had to stoop down to audience levels and trade out "actually makes sense if you understand computers" with "just sounds cool".

Save that which I can overlook, the story feels pretty stock-standard. Guy gets sucked into a computer, has to fight an evil program, beats the evil program, saves the day. That's it.

This movie loses points for me on two major fronts plotwise:

1.) Inexplicably forced love interest completely blindsides the climactic moment with a kiss that is neither earned, deserved, or makes sense. STUPID.

2.) This movie seems pretty schizophrenic about who the hero should be. The premise is about Jeff Bridges who gets sucked into a computer and has to fight his way out by beating the malevolent AI that runs it. Sounds like he'd be the hero, right? Well the movie's not called "Flynn" is it? SOOO... maybe it's about Tron?

Maybe he's a martyr at the end?
Maybe Tron represents something about the themes of the story?
Maybe Jeff Bridges dies and somehow he leaves the system up to Tron to carry on?

Nope, he's literally just some guy. Granted, he's not a total pedestrian, he's SUPPOSED to be there since his real-world counterpart created him specifically to keep things in order, but he really is second fiddle to Jeff Bridges nearly the whole way through the movie. He has one or two brief moments of fighting, but was that really enough to cement him as our primary protagonist? He vaguely echoes a recurring theme of theism, but that's hardly exercised in any significant way, so what's the deal there?

I think they thought Tron just sounded like a cool name for the movie (not that I can really blame them, still). 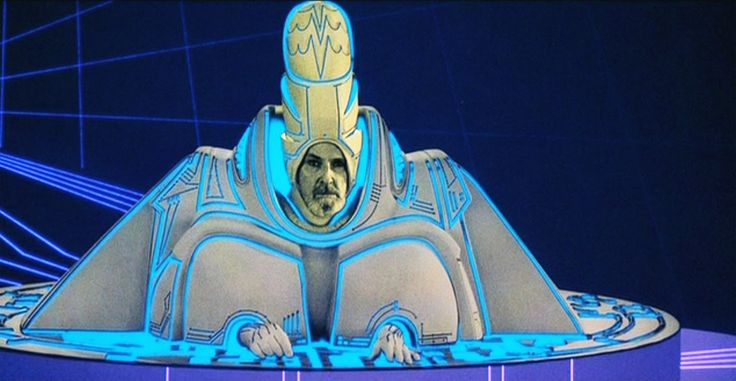 They might as well have named the movie after this guy.

A lot of the movie is simply the capture, escape, and exploration of the world within this basic plot and as much as I appreciate the chance to absorb all the nuance and creativity that went into the world and it's aesthetic, you know what I think it was missing? A really sick soundtrack.

There's some music, but it feels pretty generic. Is it wrong to think of the Kingdom Hearts 2 soundtrack at a time like this?

Actually, no. Scratch that. The Space Paranoids level almost always gave me a ruthless headache and I blame that in part on the repetitive synth music.

I have a better appreciation for that level now though. I want to see more nostalgic environments, not new **** like Tangled. GIMME STAR WARS!