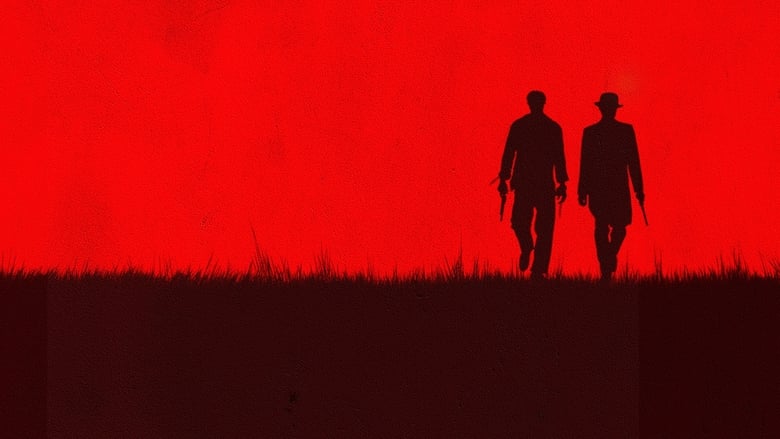 "How do you like the bounty hunting business?"
"Kill white people and get paid for it? What's not to like?"

This was in fact the first ever Tarantino film I had the distinct pleasure of watching in a theatre and to this day also the only film I ever paid twice to watch. The overall experience was just off the chain and the feeling of witnessing this special kind of old school and subjective filmmaking was simply matchless…

The movie sets the mood and muddy atmosphere from the get go, with the classic score from the 1966 original ‘Django’ complimenting the beautiful deserted backdrops. But instead of dragging a dead man behind him, this incarnation of Django is basically a dead man walking himself – a black slave in the midst of the 1800s on his way to be sold off to some random slavery plantation in the middle of nowhere. After walking from sunrise to sunset, the slave train suddenly comes to a halt when “dentist in disguise”, Dr. King Schultz, pops up to pop a question or two and a bullet or three with the slaves and slave owners, correspondingly. When Christoph Waltz comes bouncing out from behind the bushes with his silver tongue and lively teeth (or just ‘tooth’ to be precise), the tense yet untied attitude stands as solid as titanium and the titular perception suddenly appears clearer than a nightlight in the midst of the evening nightfall.

This opening introduction is pretty much perfect in every single sense and presents the audience with the essential essence of the ongoing ambivalent approach this film seems to have saddled up with; an approach, which comprises a successive contradictory standoff between being fearsomely funny and forbiddingly foul-mouthed all at the same time. When having the harsh and heavy theme of slavery chained tightly together with the harmless and humorous tone of the film, which by the way, ultimately dominates the much darker moments throughout, is a brave chance to be taken and a groundbreaking change to awaken inside the widespread debate on slavery and racism. Perhaps Quentin Tarantino won’t change society and make them see things differently, but he hands them a film that depicts the past with a different point of view, where the black man is met with great resistance but ultimately rides out with revenge served and success granted – a man who started out as a chained up slave and became a free independent individual in the end.

This may be the most mainstream Quentin Tarantino movie to be released as of today, but even so that doesn’t necessarily mean that the movie is made with the masses in mind. The quite literal “explosive introduction” should be enough in itself to tell you that the director’s hands are still dirty and dripping with blood. Personally, I see the straight forward simplicity of a revenge slash romantic storyline to be synonym for the golden age of westerns, which is the perceivable period this film attempts to put forward as well as pay homage to. There is no denying that Tarantino tries to capture that particular period in cinema, but his own distinct style is still subjectively centered and delivered dead-on and directly to the audiences. But for all its simplicity the story is a little messy and kind of confused with what it wants to turn into, which is a vibrant but not fatal flaw for the film in my opinion.

‘Django Unchained’ may be disorganized but not entirely to its disadvantage and the dialogue definitely stops the film from ever being downright dull. The delivery of the dialogue comes off like a whip with this film, especially when coming from Christoph Waltz, and I have to say that I’m definitely a slave for Quentin’s dialogue as well. The acting all around is brilliant and technically the movie triumphs too, though the editing clearly can’t compare to that of the late Sally Menke, who perhaps could have paved a better and tighter course for this movie. However, I feel like this may actually be Tarantino’s most terrifyingly entertaining movie to date – and despite the heavy subject – he still succeeds at balancing between making something that is daring, dark, dangerous, droll and a little bit dumb all at the same time. ‘Django Unchained’ is an untamed beast of a film and one of the best times I ever had at the theatre… and it is still one of the best times whenever I choose sit down and see it at home.