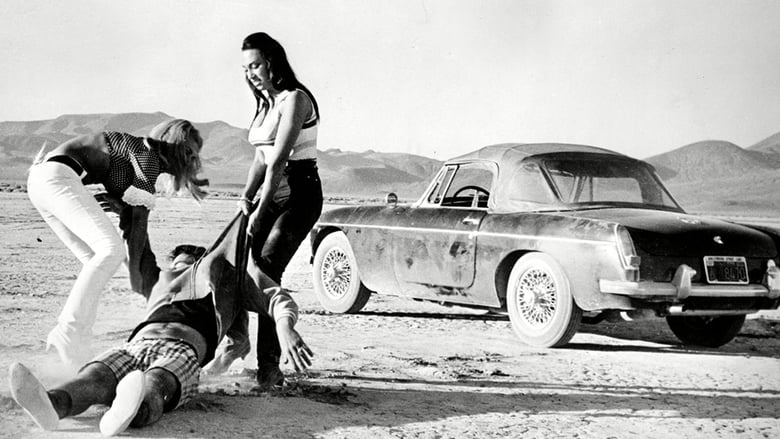 by CiCi
posted on 8/06/15
in
My first ever non-horror review! I still hope you all enjoy it though, it's of the cult, Russ Meyer, 1965 film Faster Pussycat! Kill! Kill!

I have no idea how I stumbled across Russ Meyer, I think I saw the poster for this film on the recommended section on IMDb and I was immediately captivated by it, so I began searching frantically and I eventually found it. I’m so glad I did though, it truly is like nothing I have ever seen before, but in a peculiar and fascinating way though!

The plot follows three strippers, Rosie (Haji), Billie (Lori Williams) and the leader of the girl gang, Varla (Tura Satana) as they spontaneously flee to the desert. The women are very impulsive, they randomly rush into streams and get into fights with one another over tedious details. However, upon their journey, they encounter a boy racer named Tommy (Ray Barlow) and his bikini-clad girlfriend, Linda (Sue Bernard) however they immediately clash and Tommy and Varla engage in a fight to the death, with Varla snapping his neck with ease. They then kidnap a hysterical Linda and flee to a nearby town. There, they learn that a misogynistic old man is storing a large quantity of money somewhere in the desert, and the girls hatch a plan to steal it, whilst keeping Linda hostage. Varla begins seducing the man’s eldest son, Kirk (Paul Trinka) in order to attain any details as to where the cash could potentially be stored. However, when they begin questioning the circumstances regarding Linda’s presence, all hell breaks loose. Linda attempts to escape but is caught by the man’s youngest, and mentally challenged son, simply named The Vegetable (Dennis Busch) who begins preparing to sexually assault her. However, Kirk prevents him from doing so and he and Linda flee on foot. Varla, knowing her capture is imminent, wishes to kill all the men and Linda to cover their tracks. Billie objects, so Varla swiftly kills her. Simultaneously, The Vegetable viciously kills Rosie who was Varla’s lover, so as an act of revenge, Varla runs him over before catching up to Linda and Kirk. There, she begins fighting Kirk, and is on the verge of killing him before Linda runs her over in Varla’s own car, resulting in the conclusion of the film.

As per usual, I had to exclude certain details in order to maintain a sort of brevity, but I’ll attempt to cover them as best I can!

The writing is actually quite impressive, considering it was written within a few days. In particular, the dialogue is astounding, and it has to be the most quotable film I have ever seen, and I was laughing on a very frequent basis, but that’s probably because I enjoy sexual innuendoes and double entendres, and this film is full of them, as is any Russ Meyer film. This is heavily dependent on personal preferences, but, when comedies today are quite insulting to the viewer’s intelligence and possess not an ounce of subtlety, I really enjoyed and appreciated Meyer’s approach to comedy.

The deliverance of such lines and scenes are done very well by certain members of the cast. In particular, Lori Williams (who was only 19 during filming) and Tura Satana. They manage to perform both dramatic and comedic scenes with an equal amount of skill, and they excel at both, consequently heavily contributing to the overall merit and credibility of them film, with Tura’s performance and imagery eventually becoming iconic within cult films. Yet Meyer would cast neither one of them again, sadly.

To see a film made in the mid sixties that features an array of powerful female characters that have absolutely no tolerance for any form of abuse produced by their male contemporaries was a positive and enlightening experience, and it was delightful to witness it. Additionally, all of the women are shown to have flaws as well, so in other words, they are accurate and effective representations of women, showing, that like any man, women can be immensely powerful despite inevitably containing some flaws as well. And it seems a bit of an anachronism, in that it was very ahead of its time in regard to feminism within the action genre, with Varla potentially being the first ever female lead in an action film (being made 3 years prior to Barbarella). So Meyer is to be commended for that, however, he oddly never repeated these qualities and messages throughout his expansive career, something that Tura Satana herself picked up upon in a later interview.

Meyer’s fascination and obsession with the female/Amazon physique that he admired doesn’t pay him too many favours here. For although two of his female leads can act, the other two couldn’t act their way out of a paper bag. Haji has no range whatsoever, and this was massively emphasised in her scenes with Lori and Tura, because the difference in skill is strikingly apparent throughout the duration of the film. Sue Bernard is so annoying and whiny as well, I actually kind of wanted the women to finish her off because she is unbearable and so cringe-worthy, yet, she was 17 in one of her first ever roles when she filmed this so I feel a bit bad, but nonetheless, Lori was only 2 years older and like Sue, this was her first (and only) expansive role and there are an array of adolescent actors who excel at acting, both past and present. Nevertheless, Meyer was working on a minimal budget, so selecting a cast must have been extremely difficult, so I can forgive them both slightly. The male cast are slightly better, if not a little amateurish, but they are satisfactory enough and their performances are only elevated when acting alongside Sue or Haji.

The ending felt very very rushed though, and you can tell a mile off that the writers were making the events up as they went along, in the end, it just about works and it is entertaining. However, we don’t find out why the women have fled to the desert or anything about their backgrounds, and for such interesting and enchanting characters, this was a bit of a let down. The only characters they developed were the trio of men, and they were never interesting, especially next to such innovative female characters, so I just didn’t care why the old man hated women or why they live in a totally isolated environment. Overall, the film has a short running time (about 83 minutes) so I feel as though Meyer could have afforded to have developed the history of his characters without boring audiences.

Meyer’s direction had room for improvement too, especially during the fight scenes. They are dragged out and a lot of the time, it just involved Varla rolling around the desert with one of her opponents, which got repetitive and dull after a while.

Undoubtedly, this is Meyer’s greatest production, that featured characters so intriguing, that despite their negative aspects, we couldn’t help but be invested in their efforts to trick a diverse range of male characters, both good and bad. To see an action film featuring a female lead (something that was rarely repeated until just recently) was a spectacular touch, and with witty dialogue and exciting (if a little prolonged) action sequences throughout, this is a underrated film that deserves more praise than it usually receives. Nevertheless, some of the actors are pretty dreadful and would have been piling up the Razzies had they existed in the sixties, but all of the films flaws are really only slight annoyances that don’t heavily diminish the merit of the film. Therefore, I’ll give this film