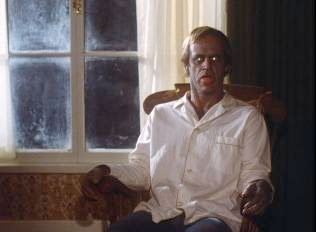 It's that time of year again! About this time every year, my girlfriend starts here 30 days of horror fest. We try to watch at least one horror flick per night, and it came to my attention that she had never seen nor even heard of Salem's Lot. When she mentioned it, I was on the fence in regards to watching, thinking that a TV miniseries from the 70s was probably going to look pretty long in the tooth these days. Get it?

Anyway, not only is Salem's Lot a pretty well-made TV miniseries, it has a couple of genuinely creepy scenes that had my girlfriend climbing the walls. Directed my Tobe Hooper (The Texas Chainsaw Massacre, Poltergeist), it's a step up from your typical TV mini. It's definitely dated in places, but some scenes hold up remarkably well. Sadly, the main character's hair style does not.

It does have issues, though. Originally a TV miniseries, it;s overlong, with plenty of drawn out development that could have been executed better, and a clumsy love-triangle that goes nowhere. That said, the cast is fairly strong, including James Mason, Elisha Cook Jr.,Bonnie Bedilia, Kenneth McMillan and more. Mason brings a classic horror movie vibe to the proceedings, and Cook Jr. is a legendary character actor from the Bogie and Bacall days.

Overall, I was pleasantly surprised by Salem's Lot, which has held up a bit better than one might expect for a 1979 TV miniseries.
» More about
» More reviews of
» More reviews by Sedai