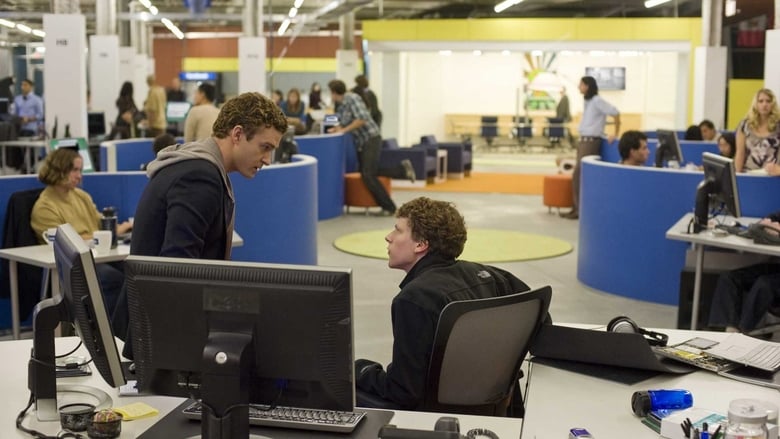 by Yoda
posted on 10/15/10
in
They say that success has a thousand fathers, but that failure is an orphan. In The Social Network, I count at least four would-be parents, which is more than enough to haggle over history's largest child support payment.

The Social Network is the probably mostly true story of Mark Zuckerberg, purported founder of Facebook and the youngest billionaire in the history of the world. Zuckerberg is played by Jesse Eisenberg as a more modern nerd; not shy and bespectacled and concerned with the protection of his pockets, but perfectly normal looking, if a bit obsessive and lacking in social subtleties.

Zuckerberg is a student at Harvard, and is preoccupied with obtaining access to its exclusive clubs. His insecurities lead his girlfriend (Rooney Mara) to break up with him and he responds by doing what any self-respecting geek would in his position: getting drunk, blogging, and writing code. On a whim he decides to gather as many photos from Harvard's house-specific "facebooks" as he can, and whips up an application so that people can vote on which female students they find the most attractive. This results in both academic probation and campus-wide notoriety, which on balance sounds like a pretty good trade.

Before long, Mark is approached by Tyler and Cameron Winklevoss (Armie Hammer and Josh Pence), identical twins who row crew and whose imposing size and baritone voices ensure that no one dares make fun of their last name. Just as Mark is not your stereotypical geek, the Winklevoss twins are not your stereotypical jocks; they have an idea, and it's a pretty good one: rework the social networking model of sites like MySpace and Friendster by making it exclusive to Harvard (by requiring a harvard.edu email address). The concept operates on the same premise as any night club: your cachet comes from convincing everyone that you already have it.

Mark agrees to build their site, and then builds his own version of it, instead. He solicits funding from his roommate Eduardo (Andrew Garfield), who becomes Chief Financial Officer of the venture. The site expands, and so does the distance between them. Enter Sean Parker (Justin Timberlake), founder of Napster and general Internet icon. Parker is charismatic and exciting and moves in on Eduardo's territory. There is discord.

The film is shown mostly in flashback; there are two frame stories, both depositions to settle lawsuits filed by Eduardo and the Winklevoss twins, respectively. This conceit allows the film to fly from one event to another at breakneck speed without losing control, as each character can essentially narrate their own version of events. Occasionally we have to remind ourselves that all the principal parties are under 30 years old. The term "white collar crime" seems antiquated; today's moguls generally prefer gray hoodies.

The Social Network was written by Aaron Sorkin of The West Wing and Sports Night fame, and his style is evident throughout. Every character is brilliant, articulate, and talks a mile a minute, which turns what's ostensibly a simple legal drama into what often feels like a thriller.

You know The Social Network is an exceptional film because it's impossible to pin down exactly which part of the production is doing the heavy lifting. Each aspect enhances the others; Fincher's direction cedes control to the dialogue when necessary, the speed and complexity of Sorkin's script is made easier to follow by the direction, and all the principal actors make both come to life.

Eisenberg is the obvious standout here, but there's no weak link. You probably won't ever hear the phrase "Oscar nominee Justin Timberlake," but the fact that I felt compelled to write this sentence at all is stunning enough. Don't be surprised to hear both Sorkin and Eisenberg's names called in January, however.