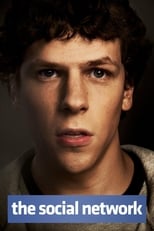 Release: Oct. 1st, 2010
Runtime: 2 hours
On a fall night in 2003, Harvard undergrad and computer programming genius Mark Zuckerberg sits down at his computer and heatedly begins working on a new idea. In a fury of blogging and programming, what begins in his dorm room as a small site among friends soon becomes a global social network and a revolution in communication. A mere six years and 500 million friends later, Mark Zuckerberg is the youngest billionaire in history... but for this...

TheUsualSuspect [i]The Social Network[/i] is one of the years best films. It's solid direction from Fincher, who knows what he wants from every aspect..
READ REVIEW

BraedenG33 It's 'The Facebook Movie' and it follows the story of Mark Zuckerberg inventing facebook, from a dorm room at Harvard in 2003 to the biggest social media website in the world, and it tells the story in a very interesting way, using flashbacks told as accounts of the events in the depositions of two ....
READ REVIEW

Gideon58 This film opens at Harvard University in 2003 where we are introduced to a brilliant computer geek named Mark Zuckerberg who is approached by a couple of snotty Harvard jocks to assist them in producing an internet dating sight for the college, an idea that Zuckerberg allegedly "stole" and turned in....
READ REVIEW
View All (10)