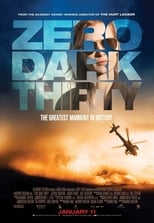 seanc Watching Chastain's intensity ramp up as she gets closer and closer to her goal was immensely entertaining.
READ REVIEW