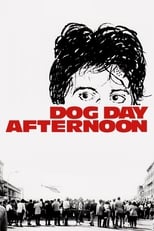 Release: Sep. 21st, 1975
Runtime: 2 hours, 5 minutes
Based on the true story of would-be Brooklyn bank robbers John Wojtowicz and Salvatore Naturale. Sonny and Sal attempt a bank heist which quickly turns sour and escalates into a hostage situation and stand-off with the police. As Sonny's motives for the robbery are slowly revealed and things become more complicated, the heist turns into a media circus.

We didn't find any linked discussions for this film. Here are the results of a quick search of possibly related threads:
9 Dog Day Afternoon
This movie proves that Al Pachino is one of the best actors ever. If Pachino did not play his charicter right in this movie, the film would of sucked. I realy enjoyed this movie. I normaly hate mov...
17 dog day afternoon
intro hey im keags movie geek for life nice to meet u question i wanna kw if ne one kws y in the film dog day afternoon that Al Pacino shouts ANNEKA to the cops when he comes out ov the bank plz le...
8 Dog Day Afternoon
Watched Dog Day Afternoon last night. I haven't watched this movie in a very long time. Absolutely fantastic! Probably Pacino's best performance and should have won an Oscar (over Nicholson's &quot...
0 Looking for a Saturday afternoon Horror in the 80's on tv
Grew up in utah and every sat. a thriller theater or chiller theater would come on and show a different movie, with a pig like movie projectionist working the reel. anyone know of a movie list they sh...
0 Open Fist hand gesture in Dog Day Afternoon - what's its meaning?
In Dog Day Afternoon, before letting FBI agent Sheldon enter the bank to see that the hostages are OK, Sonny frisks Sheldon, and a crowd of LGBT people responds with Ooo's. Sonny than makes an open fi...

Jack1 Another notable improvisation in the film was John Cazale's answer to Al Pacino's question of where in the world he'd like to fly to.
READ REVIEW

Citizen Rules Sal (John Cazale) the other bank robbery was interesting as we never really learn much about him, and yet I could tell he had his own back story, which we learn only a little about, which keeps him a mystery.
READ REVIEW

JayDee I knew it was a film set during a bank robbery, starring Al Pacino but that was about it.
READ REVIEW
View All (4)