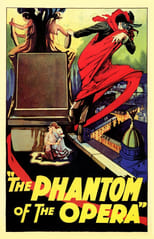 Release: Sep. 22nd, 1925
Runtime: 1 hour, 41 minutes
A grotesquely disfigured composer known as "The Phantom" haunts Paris' opera house, where he's secretly grooming Christine Daae to be an opera diva. Luring her to his remote underground lair, The Phantom declares his love. But Christine loves Raoul de Chagny and plans to elope with him. When The Phantom learns this, he abducts Christine.

4 Phantom of the Opera
Summary: The Phantom of the Opera is a Hollywood adaptation of the popular theatrical play by the same name. This film follows the theatrical production very closely and tells the story of an opera h...
46 The Phantom of the Opera
Well, finally after this project being up in the air since 1990, it seems Andrew Lloyd Webber is going to turn his broadway music onto the silver screen. Now heres a little ten year history in less th...
11 The Phantom of the Opera Trailer
Which is your favorite character that Vin Diesel portrays?? Private Adrian Caprazo - Saving Private Ryan Iron Giant (Voice) - Iron Giant Chris Varick - Boiler Room Riddick - Pitch Black/The Chro...
0 JD's Phantom Of The Opera Movies
I am a big lover of all Phantom Of The Opera movies (This includes rare and unheard of versions) I own over 45 on DVD N I would love to share my thoughts on all the versions and incarnations I have se...
0 JD's Phantom Of The Opera DVD's & Blu-Ray Collection
I have a few DVD obsessions and this is one of the ones that cost me a bomb! but in my eyes, it was so worth it. This is my Phantom Of The Opera/Phantom Related DVD & Blu-Ray Collection! 1. Ph...