The deadline for the Movie Forums All-Time Refresh List is TOMORROW! Get yours in!
← Back to Movies

Prince of Persia: The Sands of Time 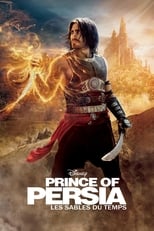 Release: May 19th, 2010
Runtime: 1 hour, 56 minutes
A rogue prince reluctantly joins forces with a mysterious princess and together, they race against dark forces to safeguard an ancient dagger capable of releasing the Sands of Time – gift from the gods that can reverse time and allow its possessor to rule the world.

thegreatone A weak script to start with, poor casting choices (His entire cast save Jake Gyllenhaal is basically British and the movie is set in Persia) and a general lack of character development has hurt his film.
READ REVIEW

TheUsualSuspect Based on the popular video game of the same name, Prince of Persia is, sadly, one of the better video game to film adaptations.
READ REVIEW