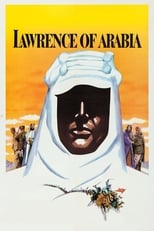 Release: Dec. 10th, 1962
Runtime: 3 hours, 36 minutes
The story of British officer T.E. Lawrence's mission to aid the Arab tribes in their revolt against the Ottoman Empire during the First World War. Lawrence becomes a flamboyant, messianic figure in the cause of Arab unity but his psychological instability threatens to undermine his achievements.

We didn't find any linked discussions for this film. Here are the results of a quick search of possibly related threads:
18 Seven Samurai vs Lawrence of Arabia
Two films often considered the two greatest epics ever made. Which would you say is better?...
2 Lawrence of Arabia Question
I'm watching Lawrence of Arabia and my disc skipped. It's scratched, and keeps skipping past a scene. At about 1-1/2 hours into the movie, who did he shoot and kill, and why? When the disc star...
0 Lawrence of Arabia Turkish scene
what does the scene where the turkish general touches lawrence has to convey ? we see him being thrown out after quite some time after he slaps the general...did they do anything else to him other tha...
78 Jennifer Lawrence Appreciation Thread
Well judging by my avatar and user title you people can pretty much tell i'm a huge Jennifer Lawrence fan. I noticed there is no thread for her and i was kind of surprised so i decided to make one. Sh...
23 Jennifer Lawrence says she is quitting acting
for a year after Hunger Games is completed. I can't say as I blame her. She has been one busy chick....

The Gunslinger45 I have spoken of how seeing films like Ben-Hur, Blade Runner, and 2001: A Space Odyssey propelled films I have already loved higher up on my list of all time favorites, and how when I saw my favorite film Taxi Driver on the big screen it was a sublime and almost otherworldly experience.
READ REVIEW

MovieMan8877445 If you've been putting this one off, like I was doing, do yourself a favor and go and watch it as soon as you can, because it really is as great as people make it out to be..
READ REVIEW

Cobpyth This is definitely another film that I'll write a longer review about in the future, but let me just shortly tell you how this film was able to meet and even exceed my high expectations in every single positive way...
READ REVIEW
View All (7)