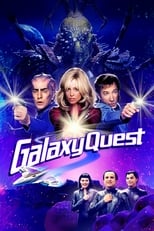 Release: Dec. 23rd, 1999
Runtime: 1 hour, 42 minutes
The stars of a 1980s sci-fi show—now eking out a living through re-runs and sci-fi conventions—are beamed aboard an alien spacecraft. Believing the cast's heroic on-screen dramas are historical documents of real-life adventures, the band of aliens turn to the cast members for help in their quest to overcome the oppressive regime in their solar system.

We didn't find any linked discussions for this film. Here are the results of a quick search of possibly related threads:
10 Galaxy Quest
I'm no Trekkie. I was a huge fan of the Next Generation but the other shows, both Voyager and Deep Space Nine never appealed to me. And alas, the vintage Star Trek can only be described as camp toda...
4 Galaxy Quest
Iv'e seen this film twice now (great stuff)anyone agree with me ....
0 Galaxy Quest TV Series
"The League star Paul Scheer has been set to write a long-in-the works TV series based on Galaxy Quest, the cult 1999 sci-fi comedy that starred Tim Allen, Sigourney Weaver and Alan Rickman....
0 Vision Quest?
Anyone see this movie before? My friend keeps blabbing about how its going to be on MSG Network this Saturday at 9pm and he can't wait to watch it. This is the first time I have ever heard of this mov...
4 Help me on a Movie Quest
Basically I'm trying to find any movie scenes where it has a women's face like this pic. Doesn't matter if it's a horror, drama, comedy, I just feel like going on a laughing binge so list them all dow...

John-Connor Galaxy Quest could very well be the most successful sci-fi space opera parody because I can't think of another one right now.
READ REVIEW

Gideon58 The title of the film is actually the title of a short-lived, sci-fi television series that during its brief time on the air, developed cult status, a fictionalized STAR TREK, if you will, that continues to live on through conventions and live appearances for its cast, whose careers have pretty much....
READ REVIEW