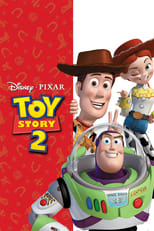 Release: Nov. 18th, 1999
Runtime: 1 hour, 32 minutes
During a garage sale Andy’s mother sells some of Andy’s old things including his favorite toy Woody to a collector. Buzz Lightyear and the other toys begin a reckless mission to save their friend. The sequel to the revolutionary computer animated feature film Toy Story.

MovieMeditation It feels natural and fresh even when it reflects on past ideas used in the original It is just such a fun, big and adventurous ride, which feels so huge and crazy with all your hopes being fulfilled almost at once We get to experience the backstory of Buzz, Woody and a bunch of new characters as well as being introduced to the evil emperor Zurg also being in an actual toy store, Buzz meeting himself, toy collectors, and well basically the entire world seems to be used as a fundament for the fun and games going on in Toy Story 2.
READ REVIEW

SmudgeEFC1985 It's still got the humour (Buzz encountering another Buzz toy that doesn't knows it's a toy like him in the first one is a hilarious little sideline) but adds a lot to the emotion, with the main storyline of Woody being torn between Andy and his friends and the fear of being broken and forgotten, and the loyalty to his new Roundup Gang friends who are bound for a museum but will go into storage without him.
READ REVIEW

Gideon58 This story would have been enough for a viable sequel but John Lasseter and Pete Docter's screenplay has added a couple of unnecessary subplots revolving around Buzz Lightyear's nemesis in a video game named Zurg and the introduction of a Buzz double who escapes from his box and traps our Buzz in.
READ REVIEW
View All (4)