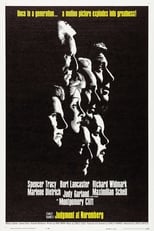 Release: Dec. 1st, 1961
Runtime: 3 hours, 6 minutes
In 1947, four German judges who served on the bench during the Nazi regime face a military tribunal to answer charges of crimes against humanity. Chief Justice Haywood hears evidence and testimony not only from lead defendant Ernst Janning and his defense attorney Hans Rolfe, but also from the widow of a Nazi general, an idealistic U.S. Army captain and reluctant witness Irene Wallner.

We didn't find any linked discussions for this film. Here are the results of a quick search of possibly related threads:
9 I've got a few questions about Terminator 2 Judgment Day!
If you recalled when Miles Dyson ( Joe Morton's character, the black scientist guy) after he got shot by the swat team, what was it him making noises and holding on that device near the explosives? ...
10 Terminator 2: Judgment Day (BLU-RAY Skynet Edition)
Blu-ray SRP: $29.99 Limited Edition T2 Complete Collector’s Set SRP: $174.99 PROGRAM DESCRIPTION It’s one of the greatest action films of all time – now see it on Blu-ray Disc the way it was meant ...