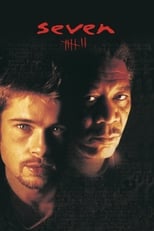 Release: Sep. 22nd, 1995
Runtime: 2 hours, 7 minutes
Two homicide detectives are on a desperate hunt for a serial killer whose crimes are based on the "seven deadly sins" in this dark and haunting film that takes viewers from the tortured remains of one victim to the next. The seasoned Det. Sommerset researches each sin in an effort to get inside the killer's mind, while his novice partner, Mills, scoffs at his efforts to unravel the case.

52 Se7en
I just finished watching this movir. I did a search for it on the site, and unless the search feature is broken or im bond..i never found a thread dedicated to it. I have the platinum edition..whic...

TylerDurden99 Toy Story is a brilliant feature, which opens up the trilogy and introduces you to it's main characters and their way of life; they're toys who came to life when their owners are away.
READ REVIEW

MovieMan8877445 It’s incredibly amazing. You just have to see it to understand. Even if you have seen it before, just go watch it again..
READ REVIEW

seanc Every big city feels like NY I suppose but I love the Gotham vibe I feel through the whole film.
READ REVIEW
View All (5)