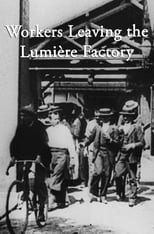 Release: Mar. 22nd, 1895
Runtime: 1 minute
Working men and women leave through the main gate of the Lumičre factory in Lyon, France. Filmed on 22 March 1895, it is often referred to as the first real motion picture ever made, although Louis Le Prince's 1888 Roundhay Garden Scene pre-dated it by seven years. Three separate versions of this film exist, which differ from one another in numerous ways. The first version features a carriage drawn by one horse, while in the second version the...

We didn't find any linked discussions for this film. Here are the results of a quick search of possibly related threads:
5 Lumičre brothers & First films in the world
I am sorry if any one posted this before..I had a search before posting this and couldn't find any similar threads. Dear mofos you know that Auguste and Louis Lumičres are very first film makers in th...
9 Fear Factory
Has anyone heard about Fear Factory getting back together?...I heard that they are getting back together withou Dino and are looking for a new guitarist....anyone else heard this?...
8 football factory
hello, im new an signed up to ask if anyone knows.... have there been 2 different versions of football factory? i have seen one which seems to be a bit slower, an has older music on it, blondie etc, ...
4 Football factory
I got this for xmas thought it was a really good. This is worth seeing for thoses people who are football thugs lol and people who are interested in mass punch ups. Its a funny film as well especially...
4 Charlie and the Chocolate Factory
My Evaluation of Charlie and the Chocolate Factory There are many fun and wacky movies out there and Charlie and the Chocolate Factory the movie done by Tim Burton is one of them. With Tim’s...