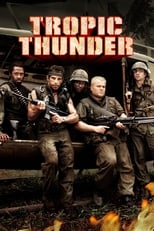 Release: Aug. 9th, 2008
Runtime: 1 hour, 47 minutes
Vietnam veteran 'Four Leaf' Tayback's memoir, Tropic Thunder, is being made into a film, but Director Damien Cockburn can’t control the cast of prima donnas. Behind schedule and over budget, Cockburn is ordered by a studio executive to get filming back on track, or risk its cancellation. On Tayback's advice, Cockburn drops the actors into the middle of the jungle to film the remaining scenes but, unbeknownst to the actors and production, the...

We didn't find any linked discussions for this film. Here are the results of a quick search of possibly related threads:
46 Tropic Thunder
This is not a review, but a warning. WARNING!!!!! This movie is the WORST Please do not waste your hard earned money on this terribly terrible piece of terriblosity. In fact don't even watch it ill...
31 Tropic Thunder
Tropic Thunder (Release Date: August 15, 2008) Studio: DreamWorks Pictures (Paramount) Directed by: Ben Stiller Screenwriter: Ben Stiller, Etan Cohen, Justin Theroux Starring: Ben Stiller, Jack B...
3 Song in the Tropic Thunder trailer
Does anyone know the name of the song in the beginning of the tropic thunder trailer?...
21 Movie Review: Tropic Thunder
Hi Everybody, Well, I still can't post a link to my movie blog site, but you can check it out if you look for valeriewriter on wordpress which has pictures on the post, so it's kinda better. Until ...
6 If Tropic Thunder was a serious war drama (video inside)
Here is a fan-made trailer me and a buddy of mine did for Tropic Thunder. It's one of our favorite comedies so we decided to make a fake trailer for it. We went for the old cliche Vietnam war movi...

The Gunslinger45 Now I love movies, and this is a movie about making a movie.
READ REVIEW

TheUsualSuspect The film starts of strong and ends strong as well. It's the middle act where it has most of the problems. Even if you can see the joke coming, you still laugh because of the delivery, good job for the actors on that one..
READ REVIEW

hello101 Tropic Thunder is my favorite comedy of all time and its uniquely humorous take on the movie business will continue to quench my funny bone for years to come.
READ REVIEW
View All (10)