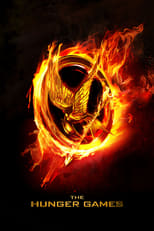 Release: Mar. 12th, 2012
Runtime: 2 hours, 22 minutes
Every year in the ruins of what was once North America, the nation of Panem forces each of its twelve districts to send a teenage boy and girl to compete in the Hunger Games. Part twisted entertainment, part government intimidation tactic, the Hunger Games are a nationally televised event in which “Tributes” must fight with one another until one survivor remains. Pitted against highly-trained Tributes who have prepared for these Games their...

66 The Hunger Games
THE HUNGER GAMES (2012) When books are written an author targets one audience and one audience alone. They don't expect their novels to be transformed, scripted and forged into a completely unique, ...
18 Hunger Games
Hi Guys just a quick one really i recently watch Hunger Games and i found the concept and plot of the film fantastic i wanted your thoughts and revies on the whole of this film.! And views will be d...
1 The Hunger Games
I checked to see we had another thread...and amazingly nothing come up! So, this is my take on the hunger games! She's a good sort and I find it depressing when fat critics (FAT CRITICS) say ...
48 The Hunger Games
I first heard about this Book that is being made into a movie on the Oldboy and Battle Royale remake thread, I've been doing some looking around and trying to find out more about this story. This sou...
5 Which Hunger Games Movie did you like the best?
The Hunger Games Catching Fire Mockingjay Part 1 Mockingjay Part 2...

Justin Katniss younger sister is chosen, but in order to save her from the games, Katniss nominates herself instead.
READ REVIEW

TheUsualSuspect It's incredibly hard not to compare this film to Battle Royale, I hate to do so, but the similarities are there and unfortunately for The Hunger Games, Battle Royale did it better.
READ REVIEW

BumbleBee The film isn't without its flaws and it's certainly lengthy with an abrupt ending, considering the fact that there are another two films to follow, but The Hunger Games makes for a good watch and a nice night out at the movies.
READ REVIEW
View All (5)