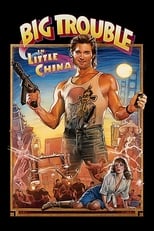 Release: May 30th, 1986
Runtime: 1 hour, 39 minutes
When trucker Jack Burton agreed to take his friend, Wang Chi, to pick up his fiancee at the airport, he never expected to get involved in a supernatural battle between good and evil. Wang's fiancee has emerald green eyes, which make her a perfect target for immortal sorcerer Lo Pan and his three invincible cronies. Lo Pan must marry a girl with green eyes so he can regain his physical form.

The Rodent The ultimate 80s classic in terms of cheese, action, tongue in cheek humour and some exceptionally wooden (but knowing) acting.
READ REVIEW

Iroquois Kim Cattrall makes for a good female lead as Gracie Law, who has sufficiently belligerent chemistry with Russell and sufficiently independent goals and motivations, while Dennis Dun as Burton's friend Wang Chi is good at portraying the right mix of the plucky sidekick's affable personality and the c....
READ REVIEW