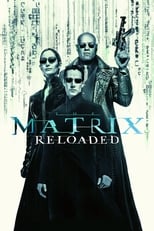 Release: May 15th, 2003
Runtime: 2 hours, 18 minutes
Six months after the events depicted in The Matrix, Neo has proved to be a good omen for the free humans, as more and more humans are being freed from the matrix and brought to Zion, the one and only stronghold of the Resistance. Neo himself has discovered his superpowers including super speed, ability to see the codes of the things inside the matrix and a certain degree of pre-cognition. But a nasty piece of news hits the human resistance:...

meatwadsprite The Matrix Reloaded bounces these ideas back and forth the whole time - while leading up to amazing set piece action scenes.
READ REVIEW

The Rodent The action is exciting though, it's well choreographed, but it's just too CG to be anywhere near as exciting as the more practical first movie.
READ REVIEW

MovieMad16 The good things about this film are firstly the action sequences.Now that Neo is "The One" and has adjusted to his new abilities,his fighting is a lot more exciting to watch.This film contains possibly the best fight scene in cinematic history.Neo Vs The Smiths.Sure some of it is special effects and....
READ REVIEW