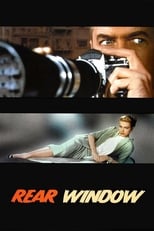 Release: Aug. 1st, 1954
Runtime: 1 hour, 52 minutes
Professional photographer L.B. "Jeff" Jeffries breaks his leg while getting an action shot at an auto race. Confined to his New York apartment, he spends his time looking out of the rear window observing the neighbors. He begins to suspect that a man across the courtyard may have murdered his wife. Jeff enlists the help of his high society fashion-consultant girlfriend Lisa Freemont and his visiting nurse Stella to investigate.

2 Question about Rear Window
Was the movie first released in B/W or Color?...
3 Rear Window errors
First of ll, I think Rear Window by Alfred Hitchcock is one of the best films ever made, maybe the best. I've watched it many, many times. I'm just curious if anybody else notices errors in this fi...
38 Disturbia VS Rear Window
What is your take on the whole Disturbia 'ripping off' Rear Window thing? When I saw the preview for this movie i thought it looked bad and instantly thought of Hitchcock's Rear Window. Now i've seen ...
6 My Rear Window Review
Rear Window- 1954 Directed By: Alfred Hitchcock Alfred Hitchcock's "Rear Window" is an amzing film that looks at sin, boredom, and dillusion. Furthermore, it surprisingly makes a film t...
54 Rear Window (1954) - A Club Discussion
...

dadgumblah One night Jeff hears a scream in Thorwald's darkened apartment and his wife goes missing (to Jeff, who doesn't see her anymore).
READ REVIEW

Nope1172 Before I watched Rear Window, I was incredible ashamed to say that I have only seen two Alfred Hitchcock films, now I have seen three.
READ REVIEW
View All (12)